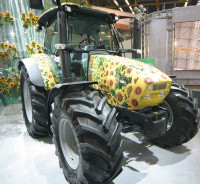 All tractors marketed under the Deutz-Fahr, Same, Lamborghini and Hurlimann brands equipped with Deutz engines are now able to run on fuel blends containing up to 100% biodiesel.

And use of such fuel does not affect performance, reliability or the engine's ability to comply with current regulations on exhaust emissions.

Key to this ability is the engines' fuel injection systems which use injectors fed from individual pumps. Deutz says that, correctly installed and calibrated, this is a system which can guarantee unbeatable reliability when operating with biodiesel, which has a higher viscosity than ordinary diesel fuels.

This fuel injection system, using 100% biodiesel, has been put through a series of rigorous tests. In one such test Deutz engines were run for over 8500 hours in on-farm conditions with no problems.

These test results have resulted in SDF including the use of biodiesel within its warranty for the Deutz 2012 Series engines - a series of four and six-cylinder engines in the 44hp to 115hp power band. They are now used in the new Same Explorer 3, Lamborghini R3 EVO and Deutz-Fahr Agrofarm tractors.

The engines can, of course, be run equally well on diesel fuel or, for that matter as a biodiesel/diesel blend mixed in what ever ratio suits the current availability of either fuel type.

The use of biodiesel is instrumental in reducing the environmental impact of farm tractors. When compared with fossil fuels, carbon dioxide emissions are reduced to practically zero and those of hydrocarbons are also significantly lower.