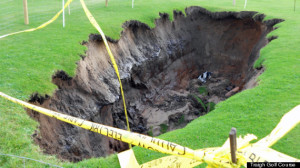 The green calm of a Scottish golf club was shattered when this mammoth sinkhole appeared near its seventh hole.

Heavy rain washed away a drain leading to the 14ft hole opening at Traigh Golf Course in Arisaig, Inverness-shire.

No one was injured in the incident, though the club is now facing a repair bill of £16,000, the BBC reports.

The sinkhole has been fenced off and the nine-hole course remains open to members in the meantime.

Greenkeeper Gavin Johnstone told STV News: "I couldn't believe the size of the hole that appeared in just one night.

"The run-off from all the rain we had shifted about 200 tons of sand and peat and dumped it on the beach."