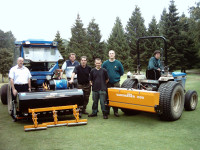 Wishaw Golf Club in Lanarkshire is the latest golf club to embrace the new technology offered by the SISIS AER-AID SYSTEM.

Course Manager Campbell Wallace was interested in seeing the machine in action after being impressed with articles he had read in the industry press and with the literature provided by SISIS Territory Manager Shaun Reilly.

He said, "After seeing the AER-AID in action we knew that the air injection system would be a major asset to the course. I was not only impressed by the air injection itself, which causes minimal disruption to the putting surface, but also the speed and ease at which the machine operates."

Being a cautious man, Campbell approached several of the many courses already using the AER-AID SYSTEM, so that he could hear first-hand of their experiences.

"Everyone I spoke to was very positive about the way the machine has operated and the results it has produced. Given the responses from my colleagues, we placed an order the next day." 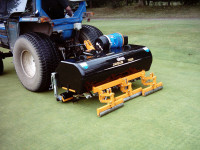 The AER-AID has now been operating at Wishaw for six weeks and Campbell couldn't be more delighted. "18 greens in 6 hours is quite remarkable, freeing up my men to do other course work."

[SISIS Equipment Ltd, designer and manufacturer of the AER-AID Javelin, now have a video available on DVD. If you haven't yet seen this revolutionary aerator in action, and would like a copy of the DVD, call Lynn Hilton on 01625 503030 or e-mail to publicity@sisis.com]