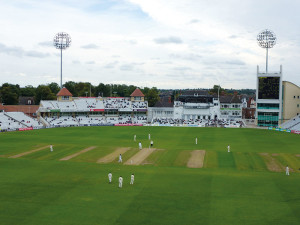 On the last day of the season, Kerry Haywood met Steve Birks, Head Groundsman at Trent Bridge, to catch up on latest developments and talk end of season renovations.

Trent Bridge is the home of Nottinghamshire County Cricket Club. It is recognised as one of the finest cricket venues anywhere in the world and has hosted County and Test cricket since 1899, making it the world's third oldest Test ground.

The founder, William Clarke, saw the potential of a quaint little meadow at the back of the Trent Bridge Inn in 1838. He married the landlady, Mary Chapman and, within a year, was hosting matches on a newly created, fenced off, cricket ground alongside the pub.

Trent Bridge held its first international cricket match in June 1899, between England and Australia, the game ending in a draw and today it is considered by many players and spectators to be one of the most pleasant in England. The architecture of the ground has been kept within the parameters set by the pavilion which was built in 1886.

The site has undergone many upgrades and developments since Steve joined in 1997, including three new stands increasing the capacity to 17,500, six permanent floodlights, digital big screens and a new office block for match day officials and administration staff.

Steve, who was previously at Derby County Cricket Club for eighteen years before moving to Nottingham, knows what's at stake and is very aware that people are quick to scrutinise and pass judgement. However, he still maintains the philosophy that, although presentation ranks very highly, first and foremost, it needs to play well. "We've had pitches where they look like scabby dogs but playability is perfect, and good looking pitches that haven't played as well," said Steve.

"I'm a big believer in getting the basics right to avoid any long term problems and issues. In our game, it all depends on what the Director of Cricket wants, and we obviously work very closely with him. A lot of people get obsessed with marks but we don't tend to focus on those too much. As long as it plays well and the Director's happy, we continue to work with that. I put more pressure on myself than the club does but that's down to my passion for the game and dedication to the club." 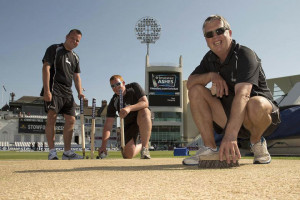 The club has invested heavily in new drainage and gravel bands which has proven invaluable in the past few years with very few problems to overcome these days. The soil profile is rootzone on the outfield down to six inches, with gravel and clay underneath. This was one of the first venues ECB did and Steve laughed that it now sometimes drains a little too quickly! However, the training ground has flooded once in twenty years as it's situated next to the river and on a flood plane, so is to be expected.

The end of season maintenance is complete which involved digging down 5 inches to the clay layer and integrating a new soil on pitch number three. A GOSTD Surrey Loam was used and built up 2 inches at a time before being laser levelled. This will be ready for play in two years time.

Over the coming months, Steve and the team will begin the programme of aeration, using both a vertidrain and Groundsman Spiker before topdressing. Then continue with general out of season maintenance including, dragbrushing, inspecting for disease and spiking if necessary. 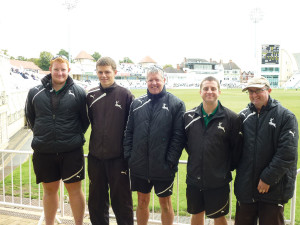 Steve places a lot of emphasis on his team's skills, dedication and loyalty and they are keen to chip in and do whatever tasks are required on any given day. The team is: Assistant Groundsmen Andrew Selwyn-Duncan and Darryl Townsend, Deputy Head Groundsman, Frank Dalling, and Assistant Groundsmen Guy Toulson, Tom Love and Richard Marshall. Deputy Head Groundsman, Vic Demain, recently left to apply his experience and knowledge to Durham County Cricket Club.

The staff all receive ongoing training and a consultant comes round once a month to chat with them and ensure everything is up to date. 90% of the staff onsite are trained in first aid and they are all expected to attend a Health & Safety course three days per year.

Work is very much governed by weather conditions, and they are equipped to deal with whatever it chucks at them. Steve looks at the monthly forecast and will usually get the pitch ready ten days before a game or, if the weather is going to be poor, he increases that to fifteen days.

For renovation works such as relaying of the outfield and pitches, outside contractor Fine Turf are brought in, whilst Headland Amenity Products analyse the soil samples taken twice a year and prepare the fertiliser programme. Usually this consists of liquid fertilisers, because of the sand based outfield, and wetting agents twice per month.

Every aspect of pest and weed control is handled by JR Amenities who have been used for the past eight years and, maybe as a result of being in the city centre, Steve has to deal with very little wildlife aside from the odd fox. 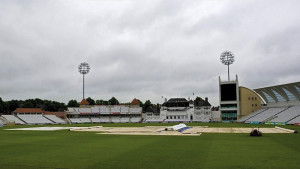 Machinery is in abundance at the ground but Steve told me his favourite piece of kit, and the one that's made a significant difference, is the Stuart Canvas Hover Cover. "The air flow system means that the covers literally hover over the ground and do not leave wheel marks when moved around. In addition, its manoeuvrability means that it can also be moved sideways and lengthways easily, on and off the pitch, to assist work during showery days. It's made life really easy and quick when the British rain comes from nowhere."

During Steve's time at the club, he has seen the industry change in the eyes of the media, fans and critics alike. "People now seem to realise how important groundsmen are. If we haven't got them, and they didn't possess the skills to overcome issues, you can't do the job and people can't play the sport."

"People are realising, and are interested in the job we do. Whether things are good or bad, groundsmen are mentioned these days. This goes right through to the top of the bill and, when we win the championship, groundsmen are top of the list to go to Buckingham Palace. I've been twice and it's a real achievement and honour."