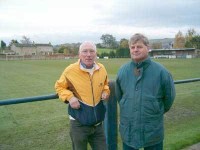 During my recent visit to Lancashire I went to Barnoldswick Town Football Club and met up with two of the club's most dedicated volunteers who, between them, have spent the last 30 years working to raise the standards of football in the town. 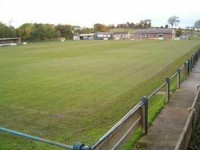 John Beswick(left) is the current Groundsman and Alverley Ashworth(right) is on the club's committee. Alverley has just recently retired from being Head groundsman at the Rolls Royce Sports and Social Club that is based in the town. He was responsible for maintaining their football, cricket, tennis and bowls facilities.

The club has 14 teams, three senior mens, one ladies and ten junior sides all clambering to use the main pitch. The club maintains a second pitch area which is also used for training and playing. Already, since 17th July, the main pitch has accommodated well over 30 games of football, more than some facilities see in a whole season.

Both John and Alveley are working hard to improve the quality of the surfaces. The club's main pitch has a reputation of having one of the best playing surfaces around and this was reflected in the fact that last year John received the honour of being Groundsman of the year for Yorkshire.

John has been associated with the club since 1974 when he was a player. He became involved in the grounds side of activities when the club had the opportunity to construct the present pitch back in 1983. It is a credit to John and his fellow helpers that they have turned this pitch around from its humble beginnings as an agricultural field to a facility that has been voted the best in the area. 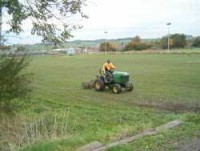 As with most clubs much of the work has been done on goodwill and beg/borrow opportunities. The local council have been very accommodating having supplied regular supplies of sand, seed and fertilisers over the years.

Due to the recent wet weather and the fact that the main pitch is predominantly soil based, John has had to instigate some mole ploughing to help aid surface water drainage. Mole ploughing is the only way he can aid surface drainage as the pitch does not currently have an effective primary or secondary drainage system. He has had to rely on some ad hoc drainage that has been installed over a period years. 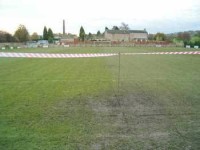 Recently, the club has managed to obtain a 25 year lease off the council for the ground, which will now allow them to apply for sports grant funding.

Both Alverley and John are very grateful for the support they get from fellow groundmen, especially Keith Kent and Steve Patrick, who have both found the time in the past to visit the club and pass on some valuable information regarding pitch maintenance.

They both recognise the potential of the club if much needed funds can be allocated to improve the pitch facilities. Ideally they would like to install both primary and secondary drainage to both pitches and invest in some more machinery.

In the meantime, life goes on. The demand for John and Alverley's skills and expertise are continually tested, especially at the end of the season at cup final time, when it is not uncommon for them to prepare the main pitch for eight matches in nine days.

They both agree that all the hard work is worthwhile when they see the enjoyment and participation of so many local people. Being part of a community is very rewarding, and enough to keep Alverley and John committed to producing good sports pitches for the teams of Barnoldswick.