by Louise Prettyman
in Industry News
on 19 Jun 2014 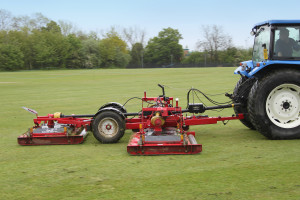 When you have 11,000 acres of grass land across Crawley to keep under control, all with differing requirements, Derek Charman of Crawley Borough Council is pleased he influenced the decision to buy two Progressive TDR15's from The Grass Group in 2013.

Derek operates the plant at Crawley Borough Council to keep the parks, open spaces, playing fields, 18 hole pitch and putt, 70
football/rugby pitches and 9 cricket outfields under his remit in trim.

To do so the two TDR15's are kept in good use between March and November; now in their second season they have lived up to the promise they showed during initial test and Derek, along with Fleet Manager Graham Satchwell, is very pleased with them.

There are many aspects of the machine that have impressed Derek. First of all it enables him to cut very early in the season which would normally be difficult due to wet ground. 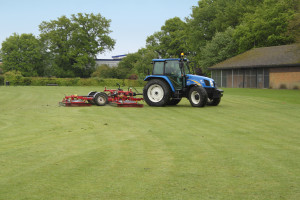 However, due to the TDR15 being very light, when compared to the competition, it doesn't cause any damage to the surfaces that a heavier machine would.

Transporting the TDR is easy, he says, you don't even know you've got it on the back of the tractor it is so light.

Derek considers the build quality to be very good; not over engineered but built to a good standard 'fit for purpose'.

A very easy machine to use, he says, like adjusting the cutting height for example. Another positive point is the dispersal of the cuttings.

Some mowers throw the cuttings into the path, but the TDR15 throws them away from the path due to the opposite direction the blades are moving, clearing the ground as you go.

He also likes the way it doesn't make tracks in the grass. With a normal rotary mower this often happens and leaves an unpleasant finish. 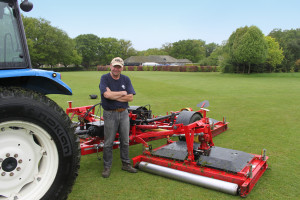 The TDR15 is different in that by the use of metal skirts around each blade, a suction is formed to lift the grass up before cutting it and leaving a great finish.

Some of the pitches are only open spaces so in one day he can cut 6 large areas in around six/seven hours. He manages to cut the pitch and putt golf course in one day.

Once the cricket outfields are prepared he will have to cut these twice a week, in a circular fashion, although Derek believes the TDR15 would make a brilliant job if he did want to stripe it.

For a rotary mower, Derek is really impressed with the finish he gets at the varying heights, with no scalping even at low levels.