Abbeydale Golf Club in South West Sheffield, established for over 100yrs, and with a playing membership of 500 plus was being forced to close regularly during the winter months due to wet weather.

"We're a very busy private club," explains Tony Ollerenshaw, Abbeydale's project co-ordinator of the new drainage scheme. "In the past many people joined for social reasons but now, most members want to play as often as they can, including during the winter months. We used to get snow and ice in the winter and the course would close itself, but over the last 10 years, as it's got warmer, it's got wetter."

Pugh-Lewis installed approx 11,000 metres of pipe drainage on 75 per cent of the fairways, over six weeks.

"At eight tonnes, our new Mastenbroek is lighter, and punches above its weight," says Tim Pugh-Lewis, in charge of the Abbeydale project. "It's quicker than our old model, compact, and gets into tight spaces. This course has been on this site for 75 years and is built on very heavy clay. Any existing drainage had collapsed over the years, and the challenge was finding suitable outfalls. The topography of the course dictates that the water has to be taken in many different directions." 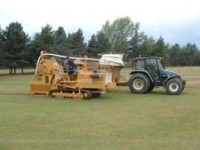 The new system channels water from the course into streams, ditches and water courses which eventually swell ponds off site, and pipes water into an old quarry which is part of the golf course.

"We've installed a good foundation, and surface drainage such as sand banding, sand slitting or gravel banding can be done at a later date," says Pugh-Lewis.

It may be a while before results can be assessed.

"We had a bit of rain the other day - our first since the installation," reports Tony Ollerenshaw, "and we checked that all the drains were running properly. They were, and we have every confidence in our new system."

For further information on the services of J. Pugh-Lewis Ltd., call the company on Tel: 01773 872362 or visit their website at: www.pugh-lewis.co.uk