3 2007 RFL Groundsperson of the year announced 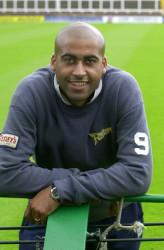 The winner of the 2007 RFL Groundsperson the Year award is Leeds Rugby's Jason Booth.

Jason Booth said: "Winning this award is a great reward for the hard work which the whole ground staff team has put in; Rugby League is the only team sport which is played over all four seasons placing significant strain on the pitch and making it a tough job.

"However, we have received great backing and the team do a marvellous job in keeping the pitch in such great condition particularly with the Rugby Union season overlapping."

The RFL received a large number of nominations for the award from member clubs which were whittled down to a shortlist of three by Keith Kent (Head Groundsperson at Twickenham), former Great Britain Lion Neil Holding (Anfield Grounds Person) and Geoff Webb (Chief Executive of IOG - Institute of Groundsmanship).

The three short listed pitches were then visited by Pitchcare magazine before eventually selecting Jason Booth of Leeds as the winner.

Former Millennium Stadium Groundsperson Dave Saltman now the Managing Director of Pitchcare magazine, judged the pitches and said of the winner: "Of the three finalists Jason has to cope with the largest amount of use at the stadium and training grounds.

"His knowledge and understanding of Groundsmanship is very good and his resourcefulness of machinery and consumable products is good too."

The RFL ran the competition to recognise and reward the efforts of the men and women whose hard work behind the scene contributes so much to the exciting game of Rugby League.

Dean Hardman, RFL Operations Manager, said: "The award is intended to reward groundspeople such as Jason who take a great deal of pride in their work and achieve results often under difficult circumstances."

Jason Booth will receive the Brian Cartwright trophy at half time during the Gillette Fusion Centenary International between Northern Union and All Golds on 20 October at the Halliwell Jones Stadium.

The trophy is named after the late Brian Cartwright who was the major event RFL groundsman for many years and was also a well known and well respected figure within the sport.