The sly old fox is an animal of folk songs, legends and children's books; they are often portrayed as the 'bad guys' - remember the fox brothers in Pinocchio? - but are also the heroes of certain stories, Disney's Robin Hood and Roald Dahl's Fantastic Mr Fox spring to mind.

It is this indecision about their character that splits the nation, with some calling for total wipe-out and others for conservation. In truth, the fox is an opportunist, more than capabale of catching its own supper, but equally happy to decimate the contents of a chicken shed or a rabbit hutch!

There are twelve true species of fox worldwide, but the one that concerns us here is the European or Red Fox (Vulpes vulpes), the most common of them all. The males are known as reynards or dogs and the females, vixens, the latter often used in reference to a sexy woman as, indeed, is the term foxy!

Foxes are canines, closely related to domestic dogs. They are generally nocturnal but, if left undisturbed, will happily forage for food during the day.

Their diet is extremely broad, and includes invertebrates, small mammals and birds. They will also take fruit, carrion and items scavenged from dustbins, bird tables and compost heaps. Eggs and fledgling birds are high on their shopping list. They will also readily take earthworms, but a long term diet of worms will wear down their teeth making feeding difficult. This is when a fox can become bold and troublesome in urban areas, turning its attention to pets such as cats, guinea pigs, rabbits etc.

One study of foxes recorded 34 different mammal species, 14 species of bird, 15 families of insects and 21 species of plants in their diet.

The average litter size is 4-6. The vixen generally feeds the cubs on her own although, in some cases, the dog fox will stay close to the den (or earth) and help rear the litter.

A fox will average between 2-6 years in the wild, but live longer if food is easily available.

The breeding season for foxes in the UK is December through to the end of February. The vixen will take up occupancy of a breeding earth in February, staying there until mid June, when the cubs will appear above ground after being weaned.

During the mating season dog foxes will travel great distances to finds a receptive vixen, stopping during his travels to make his unmistakable high pitched bark, then waiting to hear the banshee like three screams made by a vixen - this is not the sort of thing you want to hear in the dark if you are of a nervous disposition, as both calls can be blood curdling!

Rural foxes can have territories ranging between 200-500 hectares. Urban foxes tend to stay closer to home near their food source. There will be at least two earths on a territory, one for rearing the cubs and the other for general day time resting. Foxes will happily use a dry drain as harbourage.

The only true natural predator of the fox is found north of the border in Scotland - the Golden Eagle.

Cage trapping of urban foxes can be very easy. Baiting a trap with a cooked chicken, pork pie, dead rabbit, or almost anything else that is meat based, will attract a foraging urban fox.

Rural foxes are a different story. These animals have usually survived on their wits, finding food when, and wherever, they can. They certainly cannot rely on human handouts or wheelie bins for dinner!

A different approach is needed for reynard in the country. Snares, or shooting at night with a rifle and a high powered light, will be the most productive methods. Both of these methods need to be undertaken by someone with experience that has been suitably trained.

Foxes can easily be called into range of a rifle or shotgun if they have not been 'lamped' by an amateur before. You get just one chance at culling the targeted animal - they won't fall for it twice!

Snaring is an art that takes a good while to master. Be aware that you will need to have in place a method to humanely kill a fox should one be trapped. Don't forget that non target species, by law, have to be released unharmed - removing a very angry badger from a snare is not for the faint hearted! 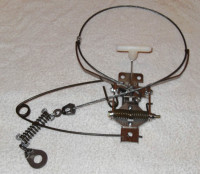 Any traps set for foxes must be checked regularly - once a day is barely enough, even if it is first thing in the morning. They must also be securely anchored.

By law, any snare set for a fox has to be free running under the Wildlife and Countryside Act 1981 Section 11. Any animal trapped MUST be alive when you check snares. If you choose to set them yourself be very very careful.

A new type of snare, called a Collarum, is available from a company called Pro Trapper - www.protrapper.co.uk.

A list of UK pest controllers can be found here: http://www.ukpcoforum.co.uk/smf/index.php?action=googlemap. You will need to register.

Don't forget, you can always ask me or www.ukpestcontrollers.org for advice.