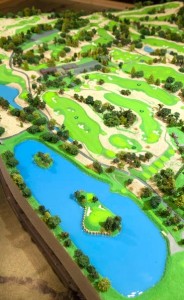 Plans for a new £30 million golf course to help JCB boost sales and build global awareness of its brand were today given a unanimous go-ahead by planners.

The proposals are for a spectacular 18-hole, 7,150 yards, Par 72 championship golf course centre on 240 acres of rolling countryside to the south of its World HQ at Rocester.

Members of East Staffordshire Borough Council's Planning Applications Committee have unanimously approved the scheme. Now tenders will be invited tomorrow for phase one of the project, which will involve earthmoving works and initial landscaping.

Group Property Director Alan Thomson said: "We are delighted that the golf course project has been given approval. It is good news for JCB and even better news for Staffordshire because of the very positive impact this scheme will have on the local and regional economy."

It is planned to start initial works in the Autumn and after a planned suspension during the winter months, earthmoving and landscaping will recommence in 2015. Play will start on the course in 2018, when it is expected that up to 100 people will be employed in grounds care and hospitality roles.

The course will be designed by European Golf Design - the golf course design company of IMG and the European Tour - best known for the 2010 course at Celtic Manor in Wales, host of the 2010 Ryder Cup. It will be built to tour-quality standard and could potentially host a major tour event, attracting competitors and spectators from all over the world.

The plans have been conceived by JCB Chairman Lord Bamford and follow an announcement last December that JCB will invest £150m to build two new factories in Staffordshire and significantly increase production to meet an anticipated growth in demand for its products.

At the heart of this premier golf development is Woodseat Hall, an 18th Century mansion currently in ruins, but which will have a new lease of life under plans to renovate it as the course clubhouse, complete with a new luxury spa, leisure facility and five-star hotel-style accommodation for visiting JCB guests from across the world.

The golf course will be the biggest marketing tool available to JCB in its history, helping grow sales and create jobs. If the course were to host a major tournament, the television coverage would help put the JCB brand firmly on the world stage.

The new golf course will be made available mainly to JCB's network of 770 global dealers. It will be used to drive business growth, helping to build relationships with new customers and strengthen relationships with existing customers. Upon completion, golf days will become a feature of the wider JCB visitor experience, which already includes factory visits, the 'Story of JCB' exhibition and machine demonstrations.