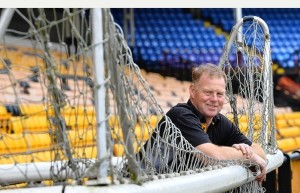 Steve Speed caused a stir when he posed starkers at his mower for a calendar in aid of cancer charities last season.

He claims he doesn't usually carry out his duties in that state, but frankly who would know?

The groundsman's duties sometimes begin at 4am on a matchday, and he's usually the last to leave Vale Park too, often after jangling his keys at a late reporter in the press box and warning: 'Sorry mate, we don't do bed and breakfast.'

The Vale job is a labour of love for Speed, and has been since he came to the club in May 1979.

Like Vale, he's spent much of the time since then battling against the odds, in Speed's case working on an old fashioned soil pitch in a league featuring ever more sand-based surfaces, undersoil heating and pop-up sprinklers.

Mind you, he doesn't regret a minute. He explains: "I was training at the old Meir Aerodrome to be a park keeper, but then the parks department reorganised and I was going to be sent to the closest job to home, which would have meant being a grave digger.

"As a 17-year-old I didn't fancy that. I saw an advert in the paper for an assistant groundsman at Vale, got an interview and started on a bank holiday."

The rumour is he hasn't had a day off since, although you won't get any complaints from Speed, who has prepared pitches for 14 managers at Vale Park.

The first was Dennis Butler before a short spell with Alan Bloor preceded the arrival of John McGrath.

Speed said: "From a publicity point of view, John McGrath was absolutely brilliant.

"You picked up the paper or listened to him on the radio on a Monday and you couldn't wait for the game on the Saturday. 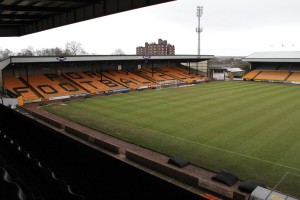 "Mind you, he was a nightmare to work with. You'd be planning for a reserve game when he'd say, 'By the way, we've got the newspapers playing here on Wednesday afternoon before the reserves. I've got an article in the Manchester papers and this is part of the deal'.

"He had a great partnership with John Rudge, who is the best coach I have ever seen here.

"Looking at his training sessions was fascinating, but I suppose you could say he had players who could do exactly what he was asking of them.

"Micky Adams probably hasn't got the quality of player to take a corner and drop it perfectly for a flick on, or have someone like Robbie Earle coming in with a perfectly timed run.

"McGrath and Rudge were like Clough and Taylor, the perfect partnership.

"But Micky Adams is like John McGrath in the way he pulls everyone at the club together, as he did when we were in administration.

"He and Estelle in the office organise staff trips like curry nights or dog racing.

"Like the fans, the staff are hoping he signs a new contract, but if he doesn't we'd wish him well."

Speed's chairmen haven't come more colourful than the late Bill Bell, who ruled the roost from 1987 until 2002. Speed spoke eloquently and passionately about Bell's contribution to the club when the chairman died last year, although the groundsman admits they had a few disagreements along the way.

One concerned a flock of sheep who were stationed at Vale Park for the summer 14 years ago.

Speed said: "We have about an acre-and-a-half of grass banking at the back of the Railway Stand which is a nightmare to keep short.

"So, tongue in cheek one night, I said to the chairman it was a pity we couldn't get any sheep.

"He got talking to someone in the pub and a week later he told me he could get six or seven for the summer.

"It worked really well. They were eating all the grass and all we had to do was keep their trough filled up with water.

"The problem was Sky Sports got to hear about the sheep at Vale, not realising they were just at the back of the stand.

Speed, it's fair to say, voiced his objections, but to no avail.

Instead, legend has it that Bell removed a cigar from his mouth and uttered the memorable line, "Speedy, round 'em up".

The groundsman, who can laugh about it now, adds: "We had these sheep running all over the pitch and Sky got their pictures. But could we get the sheep off afterwards? No chance.

"They wanted to stay on this lovely lush grass not go back to walking up the back of the stand.

"We were chasing them everywhere, it must have taken us an hour to get them off the pitch. To be fair, I have seen a few midfield players here over the last few years who didn't move as fast."

Banter with the players is part of the daily routine, and having worked alongside them for 35 years, Speed has strong views about the way they are perceived.

He said: "People get on about players, but I have found they are some of the nicest people you could meet.

"You read about footballers doing this and that, but at Port Vale they have been great.

"you find that with the visiting players who come here too. People have this thing about footballers, but they are just normal people."

Again, that doesn't mean groundsman and players don't occasionally have the odd disagreement over the pitch.

The players would like a better surface to play on, but Speed and his assistants can only work with what they have got.

He explained: "We are probably one of the few clubs now with a soil pitch.

"Other clubs in our division have had new stadiums so they have a new pitch, while other clubs have sand pitches.

"It would be nice to sit at home and operate the sprinkler system remotely, like groundsmen at other clubs can, but here if we want to water the training ground or main pitch we have to come in at 4am and put it on.

"We work hard because we want the best pitch we can get, but I am not just talking about myself here, every groundsman is the same.

"But I do take criticism to heart, including when it is our own players who criticise."

A new pitch is the dream, but with money tight at Vale Park, that looks unlikely.

Speed adds: "I have been promised new pitches for the last 10 years, but I know it is a lot of money.

"We had players come back from the FA Cup tie at Plymouth in January saying what a magnificent new pitch they had got and asking why we couldn't have one. But after getting that pitch, Plymouth went into administration, players didn't get paid for two or three months and the manager Peter Reid sold his medals to help pay the bills.

"We had quotes for a new pitch here 12 months ago because Paul Wildes came up with these great ideas about spending this and that.

"The quote came in at about £400,000. It sounded great, but I didn't realise then that it was all with Norman Smurthwaite's money."

So, for the foreseeable future at least, Speed will keep setting his alarm clock for the middle of the night and, as is the tradition at Port Vale, just get on with it.

He smiles: "If we had a new pitch it would be perfect, but then where would the challenge be? I'd have nothing to aim for."