by Craig Tucker
in Industry News, Synthetics, and Football
on 22 Dec 2015 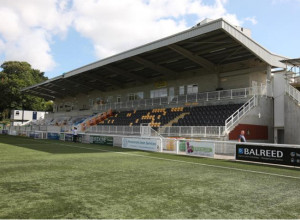 Maidstone United face paying out to replace their 3G pitch in as little as two years.

Stones expected to get eight years out of the £500,000 pitch when they moved in to the Gallagher Stadium in 2012.

But writing in his 3G4US blog, co-owner Oliver Ash revealed they may have to act sooner.

Maidstone's 3G was built with a dynamic base - a mix of stone and shingle - but technology has moved on.

Mr Ash said: "During the past few years it has been noticed that some dynamic pitches suffer from movement in the stone/shingle base, particularly when use is heavy and maintenance low.

"This can cause undulations to appear and affect the pitch quality.

"It is our understanding that the FA will no longer consider any new dynamic surfaces for any grants.

"The FA, with their consultants, is currently encouraging e-layer and engineered bases.

"By way of examples: Sutton United in National League South play on a 3G pitch with an e-layer performance base, installed in 2015.

"Maidstone, however, installed their pitch in 2012 with a dynamic base and will probably need to replace it in a couple of years' time."

Mr Ash continued: "In 2011 we were being told by manufacturers that for a FIFA 2 Star quality pitch eight years was a reasonable time to expect, as long as maintenance was up to scratch.

"Now the same people are saying: 'mmm, well, maybe you will only get four or five years out of the pitch if you want to use it in a reasonably intensive way (50 hours a week) and keep the FIFA 2 Star standard...'

"This is deeply disappointing. Clubs using 3G pitches at 2 Star standard (like Maidstone!) will be dismayed to find they need to budget for replacement after five years and not nine.

"It doesn't kill the model but it hurts it."