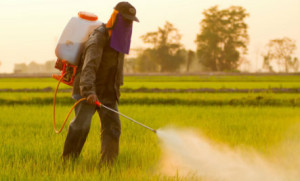 Humans have sprayed all sorts of pesticides to protect their crops since 2000 BC. Yet, after the Second World War, their use increased 50-fold. With so many chemicals left over, manufacturers decided to take the poisons meant to demolish and injure humans, and wage an eternal war against bugs instead.

These chemicals were inexpensive, effective, and enormously popular. For instance, when DDT was discovered as an effective insecticide, it was welcomed and even embraced as a solution against malaria and typhus. While making the bee documentary Vanishing of the Bees, I found footage of chemical trucks rolling through the streets engulfing people with clouds of the stuff. Their logo was even "DDT is Good for Me." Meanwhile, one farmer in Utah I interviewed recalled how in the '50s, he and his brother used to playfully chase each other in the fields with hoses that gushed chemicals.

With Rachel Carson's Silent Spring, came the realization that poisons were harming our environment as well as our farmworkers. Typically pesticides were sprayed topically over crops. Systemic pesticides were introduced with the idea that they would cause less toxicity to humans as well as birds and mammals compared to the previously used organophosphate and carbamate insecticides.

The unintended consequences however have been incredibly alarming and have decimated bee populations all over the world.

Here are 5 things you should know about these insidious chemicals.

Systemic pesticides are highly water soluble and mobile, which means they can be applied in a number of ways: by drenching the soil; injecting them directly into trees; and even applying them as a seed coating. What is novel here is that the plant actually absorbs these chemicals and circulates it through its tissues. Unlike "traditional' pesticides," you cannot wash off systemic pesticides.

To put things in perspective, neonics are 5000 times more dangerous than DDT.

Over the past two decades beekeepers from around the world (Canada, France, Germany, Italy, Slovenia, UK, and the United States) have independently implicated nicotine-based poisons at the root of colony collapse disorder, the phenomenon that has been killing millions of bees consistently for the past nine years.

As these pesticides are translocated throughout the plant tissues, pollinators that visit flowers take back the poisons in the form of nectar and pollen and store it in their cells, which affects future generations.

Honeybees can also come into contact with these pesticides via spray, dust, water, dew droplets, and soil.

They kill insects by inflecting sub-lethal damage. They weaken immune systems, disrupt digestion, impair navigational abilities, and subtly harm the brain. These effects can be particularly detrimental to colonial insects like honeybees. Neonics are one of the most toxic classes of chemicals to bees and will kill bees and other beneficial insects at nanogram levels. Even small levels of neonics affect a bee's ability to navigate and impairs their ability to detect odors - two crucial factors in their ability to forage for food.

In 2013, the European Union determined that neonicotinoids posed an unacceptably high risk to bees and issued a provisional ban on three different systemic pesticides. And Health Canada recently blamed neonics when millions of bees died due to systemically treated corn.

In the United States, the Environmental Protection Agency (EPA) continues to allow neonics even though scientific assessments and early reviews from the early '90s, expressed concerns with the high toxicity of these chemicals not only to honey bees, but to birds, other wildlife, as well as to endangered species. The EPA's decision-makers overruled the scientists, however, and downplayed their warnings, according to Center For Food Safety.

Meanwhile, makers Bayer Crop Science and Syngenta refuse to take accountability and continue to state their poisons are safe if used - according to their label.

Most Prominent Pesticides On the Planet

With brand names like "Gaucho" and "Poncho," these nicotine-based pesticides were first introduced in Europe in the mid '90s. (Eventually, French beekeepers began reporting massive bee deaths and called the phenomenon Mad Bee Disease. After out ruling the usual suspects they concluded neonics were to blame.) In the United States, neonics became widely used in 2003, not long before the advent of Colony

Today, systemic pesticides are the most widely used insecticides in the entire world, with over 500 different neonicotinoid products on the market, and applications estimated to exceed 150 million acres annually nationwide.

In the U.S., neonicotinoids are currently used on about 95 percent of corn and canola crops; the majority of cotton, sorghum, and sugar beets; and about half of all soybeans. They are also used on apples, cherries, peaches, oranges, berries, leafy greens, tomatoes, and potatoes. And applied to cereal grains, rice, nuts, wine grapes. and used on trees, turf, and on plants you find at Home Depot or Lowes.

The Toil On Our Soil, Brains, Rivers, And Other Creatures

Bees are just the tip of the iceberg. These poisons also leach and accumulate in our soil and water. In fact, neonics have already seeped into our rivers and have been shown to stay in the soil for years (as they break down, their metabolites are more dangerous than the original parent compound).

Naturally, any pesticide that can persist for many years, builds up in soil, and leaches into waterways is likely to have effects far beyond the pest insects it intends to target. Neonics have been shown to harm beneficial insects such as worms, as well as other pollinators such as butterflies, and possibly bats.

In Gardeners We Don't Trust

Concerned citizens have responded to colony collapse disorder by planting "bee-friendly" gardens to provide urban foraging grounds. Unfortunately many bee-attractive plants sold at top retailers in the U.S. and Canada continue to use persistent, systemic neonicotinoid insecticides Interestingly, products approved for homeowners to use in gardens, lawns, and on ornamental trees have manufacturer-recommended application rates up to 120 times higher than approval for agricultural crops. Because many products approved for home and garden use can be legally applied at rates significantly higher than the rates approved for agricultural crops, home gardeners may unwittingly be exposing pollinators to toxic levels of pesticides.

And, neonicotinoid pesticides that are sold to homeowners for use on lawns and gardens oftentimes do not have any mention of the risks of these products to bees.