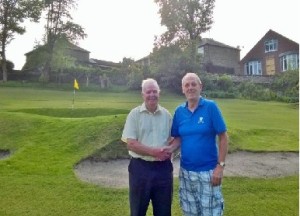 The milestone for Peter at the six-hole par-three course at Rastrick is that he is looking forward to his 80th birthday in August.

And he would like to celebrate by having a score that would be less than his age at Elland Golf Club, where he also is a member.

He has done it many times at Castlefields, but with it being par three, the target is easier.

Peter lives on the edge of the course and this became quite handy as he could just pop outside and play a few holes in his spare time after his greenkeeping duties.

The six-hole course has also provided something of a record for Peter in that he has had 22 holes-in-one, with 19 of them on his home ground - and this includes a hole-in-one on every hole at Castlefields.

Another coincidence of the other three holes-in-one he has had, at Longley Park, Ryburn and Dewsbury, all came on the ninth.

And when he scored the first of those, he and his playing partners could not celebrate it as it was the steward's day off and the bar was not open!

Peter was President of the Halifax, Huddersfield District Union in 1995 and captain of Castlefields in 1961.

In his early life Peter worked at Walshaw Drake's, a mill at the bottom of the course which has now been pulled down. He would often pop up to the course during his break and cut a couple of greens and then go back to work.

When the mill was demolished he helped out with greenkeeping at Huddersfield Golf Club and later at Elland.