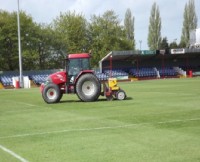 Alfreton Town have unveiled plans for several improvements to the Impact Arena, the majority of which will be undertaken throughout the early part of the summer.

The curtain finally came down on the Impact Arena last weekend with the playing of local league finals.

At the first opportunity to be able to commence improvements to the stadium, Monday, work began to maintain and improve an already magnificent Impact Arena playing surface.

Groundsman Rob Brooks has been busy applying £5,000 worth of upgrade to the surface with 100 tonnes of a sand and soil mixture top soil being put down, 14 bags of grass seed drilled in by a contractor and verti-draining set to take place to aerate the soil.

The club's excellent surface received praise from several visiting clubs last season and Brooks has been named among the top five groundsmen in the Conference Premier last season, the winner of which is expected to be announced in September.

The works are just part of a £60,000 package of improvements to the stadium which will add to supporter benefits when attending the ground.

The club have also organised the first stages to having a roof installed over the Bentley Close seating area.

Cover is expected to be in place within the season the club is heading into, but firstly, the club have had to seek a foundation report and await results from it, before they can actually sink any steel.

Reds supporters will also once again have the use of the John Harrison Bar for each and every fixture.

The facilities had to be utilised by the club for two fixtures towards the end of the season when match day sponsors had been over-booked.

However, new plans have been put in place to house additional match day sponsors during the 2012/13 season within other areas of the ground.

All of which means Alfreton fans are getting the return of the John Harrison bar as well as the Reds bar for the sole use of home supporters.

Meanwhile, club chairman Wayne Bradley has said he is pleased with the early uptake of season tickets since renewal forms went out last week.

Early bird season tickets and ten match tickets are already proving popular as fans make sure they take advantage of big savings over the season.

The admission for each of the 23 league games next season will be £18 for adults.

Season tickets, ten-match tickets and junior reds applications can be ordered by contacting Lisa Towerzey on (01159) 392090 extension 107 between 9am and 3pm Monday to Friday. Payment can be made via credit card or by cheque in the post to ATFC Season Tickets, Impact Marketing and Publicity Limited, Media House, 116-118 Derby Road, Stapleford, Nottinghamshire NG9 7AD.