by Charmian Robinson
in Industry News
on 17 Nov 2010

So that's it. The final demonstration day of Campey Turf Care Systems' UK tour took place on 3rd November at South Staffordshire Golf Club, Wolverhampton, and yet again the turnout was high on what has been an outstanding series of events.

As many as 650 grounds professionals took time out from their daily responsibilities to attend one of the 16 venues across the UK. Some days it rained, for others the sun shone, but whatever the conditions the majority of those who had declared an interest attended their chosen venue.

The Campey team would like to thank everyone for their support and in particular the following dealerships; The Double A Trading Company, Greenlay, F.G. Adamson and Son, Chelmsford Grass Machinery, George Brown Implements, JSM, Lister Wilder, Devon Garden Machinery, H. Curtis and Son, Ted Hopkins Ltd and Parks and Grounds, for ensuring that their combined efforts to invite new and existing customers to attend the demo days in their area, was rewarded. 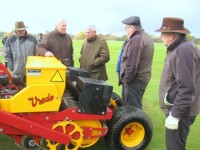 Many of those who came to see the machines in action on sports turf surfaces have gone on to place orders. A Vredo Compact 1.8m Seeder has been ordered by Bradfield College and two Imants Rotoblasts have already been delivered - one to the University of Warwick, the other to The Manchester Golf Club. Head Groundsman at Warwick, Charlie Yeomans, was full of praise for the demo day held at his ground:

"People are still coming up and saying what a worthwhile day it was," said Charlie. "Many of them including myself were not aware of the extensive range of machines under the Campey banner and it was very useful to see them in action.

As for the Imants Rotoblast, once we saw it in action we could see what good value for money it was. We've been using it on site now for a couple of weeks and it has cut the time taken to clear leaves and debris dramatically. We're very pleased with its performance." Course Manager Mark James at The Manchester GC was equally impressed. "Seeing all the equipment working helped us decide which equipment was best for our application. We decided to buy the Imants Rotoblast as it performed extremely well and was competitively priced." 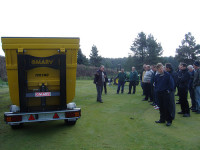 For Campey Turf Care Systems a demo tour is not just about sales, it's also about education. The company was delighted to see a significant number of students and lecturers present at several of the venues.

Wilf Simcox, Lecturer in Horticulture at Warwickshire College was one such attendee. Warwickshire is one of the largest general further and higher education colleges in the UK incorporating six centres of education following the latest merger with Pershore College. Wilf was extremely impressed with the variety of equipment demonstrated.

"This was an excellent opportunity for our group of greenkeeping students to see first hand a whole host of equipment not just for golf courses but for other sports too. Many of our students have seen individual machines at work, but you rarely get the opportunity to observe the entire renovation and maintenance process in one sequence. Although the diversity of machines was not necessarily relevant to everyone, it provided excellent points on best working practice for later discussion."

Among the most popular models shown were the Koro by Imants TopMaker, Dakota Turf Tenders and the Imants Shockwave, Rotoknife and Rotoblast. The Vredo overseeders, Omarv flail/scarifier mowers, Raycam Aeraseeder and rubber dragmats all played their part and generated a lot of interest and questions.

"Overall we are delighted with the response we've had," said Richard Campey. "A lot of time and effort has been invested in this tour and it's extremely gratifying to know that our industry is still willing to embrace new ideas as well as refining tried and trusted practices. We look forward to carrying out many more Educational Machinery Demonstration Days in the future, here in the UK and further afield in Europe."