Peter Driver, Ransomes Jacobsen's PR Manager retires later this year and, in this article, he looks back at a visit to South Africa where he was fortunate to visit the Legends Golf & Safari Resort. It is renowned for its 'Extreme 19th' hole, which requires a helicopter ride to the tee - some 400 metres above the green. However, he found there was much more to admire than just the 19th

Legends Golf & Safari Resort is situated in the middle of the Entabeni Safari Conservancy, a massive malaria-free game reserve of 22,000 hectares bordered by the Waterburg mountains, just under a three-hour drive north of Johannesburg.

The reserve and the golf course are the fulfilment of the vision of joint owner, Peet Cilliers, a retired lawyer. In fact, the reserve and golf course are just a part of the overall US$600 million scheme which will bring wealth to the area, not just through sport and photo safaris, but through the arts, culture, community development and educational schemes.

IFA Hotels & Resorts have partnered with Cilliers in this project, as part of their continued investment in Africa, and South Africa in particular.

They also have a resort project at Zimbali on the KwaZulu-Natal Dolphin Coast, sixty miles north of Durban

On arrival at my quarters at Hanglip Mountain Lodge, a remarkable selection of five-star African baroque style buildings in the tranquil emptiness of the vast open plains of the reserve, I was introduced to John Dixon, the Resort's PR Manager and a former game ranger, who was to be one my guides for the day.

We jumped into his long wheelbase Landrover and headed to our first stop, the official entrance of the complex; the Gatehouse and Welcome Centre. The architecture has been inspired by buildings from the Old Kingdom of Monomatapa, a medieval African dynasty that covered a huge area that is known today as Zimbabwe, Kalahari, Mozambique and parts of South Africa. This area houses the reception, shops, restaurant, administration offices, security services and includes an outdoor amphitheatre for musical and cultural events.

Having completed our tour of the centre, I jumped back into the Landrover for the short trip to the helicopter hangar. Here I was introduced to Julian Moller, Legend's resident pilot and a former South African Army flyer, who was taking me on a six minute flight around the course and up to the Extreme 19th. This was my first ever helicopter flight and it was truly exhilarating as we flew low across the course and up Hanglip mountain, passing the clubhouse and several villas. This was a great opportunity to see the scope and scale of the course, set as it is in fifteen square kilometres of archetypal African bushveld.

Ignoring my plea for a 'gentle' ride, Julian swooped up to a small plateau on the side of Hanglip and obligingly stood the helicopter on its nose in order that I could get a photograph of the 19th tee with its Africa-shaped green some 430 metres below.

The Extreme 19th is the longest par 3 in the world, has received worldwide publicity and is worthy of that overused word 'unique', because there is just no other golf hole like it, anywhere. Standing on the tee, you look down at the green, which has been constructed in the shape of the African continent, complete with the island of Madagascar sitting in a huge area of sand. The 3,500 rand (about £150) helicopter ride to the tee includes six balls and a group of spotters on the ground to find any wayward balls.

The green is approximately 400 metres laterally from the tee and requires a good drive of around 280 metres before physics takes hold and the ball descends in a parabolic curve towards the green. It takes an amazing twenty-five seconds for the ball to reach the ground. The average golfer will probably hit a drive of around 180 metres, which will just about be good enough to reach a 70 metre long sloping fairway, which will propel the ball closer to, or even onto, the green. To keep it competitive, there will be a US$1 million prize for the first hole in one when the course officially opens this year!

Trevor Immelman, Sergio Garcia, Justin Rose, Luke Donald and Padraig Harrington are just some of top tour professionals that have experienced the Extreme 19th. When Sergio Garcia visited Legends, he made par with one of his six balls, but his competition ball missed the green and he bogeyed the hole. However, Harrington made a return visit, took four practice balls and then hit his competition ball into the huge bunker surrounding the green. He splashed out, landing eighteen inches from the pin, and sunk the tricky putt to become the first professional to register par. 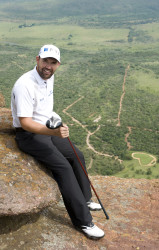 After hovering above the tee for what seemed like an eternity, Julian swept down to the green and out over the course for the return trip to the hangar, demonstrating along the way his flying expertise nurtured in the South African Army.

From the helicopter, it is possible to really appreciate the layout of the course and the vastness of the setting. The Kikuyu grass fairways criss-cross this huge area of rolling plain and dense bushveld, with the massive bunkers and several lakes adding definition.

My next stop was to visit David Riddle, the resort's Golf Director and one of the co-designers of Legend's 18-hole championship course. He was one of Cilliers' first hirings and laid out the basic design of the course before handing it over to the eighteen leading professionals from sixteen countries, who then added their own individual touches.

"I've been here for four years, in fact, since the very beginning of the project," he said, "and it's been an extraordinary experience. There aren't many courses where construction has been stopped due to lions roaming in the vicinity; but that's what happened when we were building the Extreme 19th green. They took up residence for a couple of days and we had to wait until they moved on."

"The 19th is outside the confines of the Legends course, which we have fenced off to prevent the 'Big Five' animals - elephant, lion, rhino, buffalo and leopard - from encroaching. However, we still have plenty of large animals within the confines, including giraffe, antelope, kudu, impala, warthog and jackal, along with egrets and black eagles, so the golfers will be playing in an environment unlike anywhere else in the world."

"The wildebeest can be, how can I say, boisterous and they can damage the greens, but we have a policy to repair any damage before we cut. I have six greenkeepers who each have sole responsibility for just three holes. I believe that's the right way for this course and it gives them a sense of ownership."

"I'm responsible for fifty-five people, which includes the greenkeeping team and the caddy rangers, who are a group of indigenous youngsters and part of Pete Cilliers inclusive programme to support the local community. These young people spend a month at the Nature Guide Ranger School learning about the flora and fauna, then they are taught the rules of golf and golf etiquette from scratch. Once trained, they will act as both caddies and guides, to ensure that the golfers gain the maximum benefit and enjoyment from their round."

"Our course maintenance equipment has been purchased on a package deal from CSE Equipment in Johannesburg, so it's a range of machinery from the Ransomes Jacobsen offering. We've got their new Eclipse walking greens mowers, which have a petrol engine, but with independent electric motors for the drive and cutting cylinder. I particularly like the quality of cut and the ability to set a constant clip rate. I know that all eighteen greens will cut exactly the same. We also have LF3400 light fairway mowers which are very good on our undulating fairways, and their trim mowers, the AR3 and TR3, are performing very well."

"The Extreme 19th and Legends championship course get most of the press, but we also have our par 3 Tribute course, which replicates ten of the most famous par threes in the world. It includes the Postage Stamp from Royal Troon, the 12th and 16th from Augusta and the 17th at TPC Sawgrass, along with many impressive others. The grasses we've used mirror those on the original courses."

"Here at Entabeni, we are acutely aware that we are operating in an environmentally sensitive area. Our greenkeeping practices are aligned with Audebon International standards, which are recognised and accepted by the USGA, and that means we operate within strict parameters with regard to the use of pesticides, our water management, waste recycling and general management of the business."

Thanking David for his time, I jumped back into the Landrover and was driven over to see Pete Richardson, Legend's recently appointed Marketing Director, in his office at the Pioneer Camp.

The Pioneer Camp was the first building project at Legends, constructed to provide accommodation for the 1,000 labourers and offices for the support staff, who are on site for the duration of the building programme. When all construction is complete, the camp will be dismantled and the cement slab will be utilised as part of the resort's recreational facilities.

"We see this as the first African renaissance development in South Africa, encompassing the past and embracing the future," he said. "We understand that we have a responsibility for the local community and have taken these social responsibilities extremely seriously. The Legend Foundation, a non-profit making trust, focuses on the development of previously disadvantaged communities through sport as well as other disciplines. This will help the development of many skills and assist in the social uplift of all the surrounding communities. We are building a clinic and houses to add to the existing Nature Guide Training School, the Hospitality Training facility and the Wildlife Centre. Our aim is to provide the ultimate resort experience, but with an African twist. We will have something for everyone, for all ages, and for all the family."

John Dixon was waiting patiently for me outside Pete's office so, after farewells to the marketing team, I was transported back to Hanglip Mountain Lodge, to freshen up before going on an evening game drive. This was real highlight of my visit and I was fortunate enough to see the 'Big Five' and more. Two and half hours later, totally exhilarated, we returned to the lodge for dinner and an early night in readiness for the drive back to Johannesburg the next morning.

Leaving the resort the following day, raising clouds of dust on the sandy tracks and getting final photographs of the warthogs, zebras and kudu that were grazing the plain, I was able to reflect on the enormity of the vision of Peet Cilliers. From the outset he was determined not to compromise on any of the facilities within the reserve, while always considering his social responsibilities to the indigenous people. He has masterminded the construction of a wonderful championship golf course, a unique attraction in the Extreme 19th and a Tribute course that pays homage to golf's sporting heritage. He is a long way down the road to creating a truly world-class resort in this bushveld wilderness, but doing it with a social conscience.