0 A baptism of fire, and water, for Kidderminster Cricket Club's groundsman 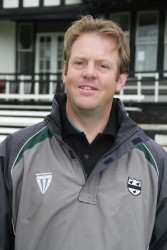 Worcestershire County Cricket Club's New Road ground is no stranger to flooding and, when the Environment Agency issued a flood alert for the area, Head Groundsman, Tim Packwood knew what was heading his way.

So, a quick call was made to Damon Willetts, the new Head Groundsman at Kidderminster Cricket Club, to prepare him for his baptism of fire!

This spring could go down on record as one of the wettest starts to a cricket season for decades, with rain falling on a daily basis for the best part of a month. Some parts of the country received well over 130mm of rain during April and May.

Many cricket clubs had to cancel matches, often due to the fact that they simply could not get machinery on to their squares to prepare pitches as the outfields were at field capacity.

Worcestershire County Cricket Club's New Road ground is no stranger to flooding, sitting, as it does, alongside the River Severn. So, when floodwater reached four metres on the 1st May, resulting in a partial flooding of the ground on three sides of the square, their Chief Executive, David Leatherdale, and Head Groundsman, Tim Packwood, put a contingency plan into action, removing machinery, furniture and consumables out of harms way. They had also alerted Kidderminster Cricket Club (their main outground)

that their Chester Road facilities might be required to host the up-and-coming CB40 game against The Netherlands on 7th May and, possibly, the County Championship game against Surrey due to start on 9th May.

Tim Packwood contacted our editor to see if he would be interested in following events. Without hesitation, he was hot footing it across to Kidderminster where he was met with a flurry of activity, with most of the county's groundstaff, including Tim, on hand to help Damon Willetts, the Kidderminster Head Groundsmen, set up the ground for the bank holiday game.

groundstaff had brought with them a number of flat sheets to help cover up the 'Kiddy' square, along with additional equipment to help prep the ground. They even hired in a Blotter to help remove water from the sheets.

For Damon, who was only appointed as Head Groundsman at Kidderminster in January of this year, this was a real baptism of fire. Whilst aware, when he joined the club, that Chester Road is Worcestershire's main outground, he was expecting that, in his first year in charge, and with no games scheduled into the 2012 fixtures, he would have a season to 'bed in' before being required to host major games. How quickly things can change!

Although happy with the square, Damon was concerned about the outfield. It had been rather neglected for several years, but he knew that, given time and resources, he would be able to make improvements. He had already treated the outfield for

worms and moss and was due to put on a second weed and feed.

In addition, he was gradually working his way around the 2.5 hectare site with a sand, soil and seed mix to repair the drought damage from last year and localised wear from junior football played on the outfield in the winter.

Damon first got wind of the problems at New Road on Sunday 29th April, when Tim Packwood called him to say that they were on flood alert, and he should get prepared to host the CB40 game aginst the Dutch the following Monday, and probably the County Championship match against Surrey on the Wednesday!

It soon became apparent, on the morning of Monday 30th April, that the scheduled WCCC 2nd XI match would need to be cancelled to accommodate the 1st team matches against The Netherlands and Surrey. 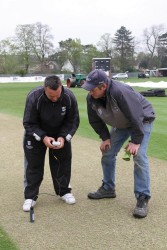 up and preparing the areas for the tents and marquees, and ensuring the ground looked at its best in terms of presentation.

They worked right through the week, including Saturday and Sunday, with most of those days being twelve hours or more. On the Friday, the marquees and temporary seating arrived, along with thirty portaloos!

Much of the time was spent taking sheets on and off the square, trying to find a balance between keeping the rain off and letting air get to the grass. A quick application of fungicide in between coverings kept the fusuarium at bay.

Preparing for his first full county game was quite a challenge, but Damon came through with flying colours and, apart from a few interruptions for showers, everything passed off without incident, although Worcestershire lost!

By this time, David Leatherdale and Tim had a better picture of the flood situation at Worcester. The floodwaters had subsided very quickly enabling them to switch the Surrey game back to New Road. I suspect Damon was not unhappy about that decision, but he certainly had a taste of what to expect when preparing for county games, which should stand him in good stead for the future.

Next, it was off to New Road to see how Tim had prepared for the game against Surrey. He was keen to explain that this recent flood had only partially affected the square and three areas of the outfield and, with no debris (silts) left once the floodwater had subsided, there was no real issues with cleaning up any deposits on the square and outfield.

Fortunately, the pitch allocated for the match against Surrey had not been affected, so it was just a case of letting the water subside so that match preparations could begin.

Tim likes to carry out a fourteen day prep on his wickets, bringing down the grass height in stages from 12mm to 4mm. The amount of rolling and covering will be dictated by the weather and, more importantly, the moisture content of the square. Tim has invested in a moisture probe that records the moisture content of the soil profile. This helps him to understand the condition of his wickets at any given time, for example, the before and after effects of rolling.

The action of rolling squeezes air spaces together, thereby forming fine channels which, through capillary tension, force water out of the soil profile and into the atmosphere.

Early on the second day of the match, Tim and his the staff were out on the square busily carrying out final preparations, mopping water off the flat sheets, before removing them along with the raised covers. The previous evening they had managed to mow the outfield using their Toro triple mowers - in two directions for best presentation - making best use of a sunny evening.

In the final half hour before play was due to start, all that was left to do was complete one final mow to clean up any debris, overmark the crease, set up the stumps and give the pitch a final roll with the hand roller.

There are, of course, other wickets that require some work so, whilst the two teams were out warming up, rolling of one of the other wickets, along with some minor repairs, was taking place. Finally, the practice nets were taken down.

The umpires came out, along with David Leatherdale, to inspect the wicket and see if everything was going okay. The score from the first day's play saw Worcestershire on 283 for 8, so Tim was aware that it probably would not be too long before the innings came to a close and the staff would be out to roll the pitch again, re-mark lines and repair any footholes. Sure enough, within half an hour, the innings was complete.

All the groundstaff were out on the square again, carrying out the repairs and setting up the pitch for the next innings. It was lunchtime for the staff who, on match days, are given a meal in the player's lounge; and a very nice meal it was, too.

It was fast approaching 1.00pm, and time for the teams to have their lunch. Once again, the groundstaff headed back out onto the square to clean up, re-mark, and roll the wicket ready for the afternoon's play.

Getting the game on so quickly after the flood is a testament to the skills of Tim and his groundstaff, Sarah Addison, Robin Saxton and Martin Watts. Together, they make a formidable team and should be congratulated for their efforts.

Worcestershire is one of the most picturesque county cricket grounds in the country and, at times, can also be one of the most challenging, with its propensity for flooding.

Our thanks to Tim for sharing his experiences, and our best wishes to Damon for a less hectic conclusion to his first season at Kidderminster.