0 A bit of Dacorum at Little Hay Golf Complex 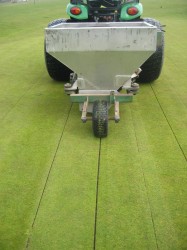 It is said that 80% of workers hate their job. This seems a high percentage until one thinks of the monotonous work in which some are employed. On assembly lines, for example, one person may spend all day simply attaching one component to a piece of equipment passing before him; doing this eight hours a day surely cannot appeal to many.

By comparison those involved in greenkeeping work in the open air. The work is varied and is as constantly changing as our weather. Providing there is a good manager looking to develop his staff, a fair payments system and a vibrant team spirit the chances are that you will not be counted in the 80%.

George Reid is a member of BIGGA. He is Course and Complex Manager of the Little Hay Golf Complex near Hemel Hempstead. Constructed in 1974/75, and opened in 1977, the Hawtree designed course is built on heavy land but with superb views over the surrounding countryside. Originally an 18 hole course with a 9 hole pitch and putt, it is now an 18 hole golf course with a 6 hole pitch and putt facility and a 23 bay public driving range.

George has been working on the golf complex for eighteen years and is enthusiastic about his job, "I look forward to going to work every day." He explained that, until December 2007, the golf complex was owned and managed by the local authority - Dacorum Borough Council. It is now in the hands of the Dacorum Sports Trust.

£400,000 has been committed to the drainage of the 18 greens and the large practice green, the renovation of the bunkers, a new irrigation system and some new machinery. With 45,000 rounds of golf a year George is anxious to get this work undertaken with minimum disruption to the players.

There was no hope that his budget for the greens drainage would enable him to remake them in their entirety so he was looking for a satisfactory compromise. It was at the English Golf Union Master Class at Woodhall Spa that he first came across the Shelton system of gravel band drainage. On the famous Hodgkin Course it had solved the problem of the very wet 16th green. Also, it had been used extensively on the adjoining Bracken Course. George looked into this approach in greater depth and decided the greens at Little Hay could be effectively drained with minimum disruption to the players.

In April the Contracting Division of Shelton Sportsturf Drainage Solutions undertook the work. To reduce the possibility of uneven playing surfaces the greens were initially tined to 400mm deep using a Vertidrain fitted with 13mm diameter tines. The 'gravel' bands are 250mm deep and spaced at 400mm centres. They are backfilled with 4-8mm Lytag which has a hydraulic conductivity of 2323mm/hr. These bands connect with an 80mm diameter land drainage pipe sited just off the green which takes the drainage water to the disposal area.

Lytag has been used for the greens drainage because of its high rate of hydraulic conductivity. It has other advantages also - it is approximately half the weight of crushed gravel, it absorbs some soil water providing a micro climate conducive to grass growth and, being a manufactured product, it is not subject to the increasingly expensive aggregates tax. Richard Clark of Shelton's technical department explained "the cost differential between crushed gravel and 4-8mm Lytag becomes insignificant when the speed of drainage is considered. In comparative tests medium gravel rated at 10,576 whereas the Lytag rated at 60,000 - almost six times faster. On site cost differences, often in the order of £10-15 per tonne, highlight the advantages of using the manufactured product."

George planned the work meticulously. Every day he had an early morning meeting with the on-site contracting manager to review the previous day's work and to schedule the new work. The aim was to drain two greens per day which included rolling the finished greens with the roller on the Vertidrain. In another context he has job satisfaction with the finished work; "It is unbelievable that we can get a green back into play immediately it is finished. We have only closed one fairway at any one time, so disruption has been minimal" said George.

Over 90% of golf clubs in England have no waiting list, and many have abolished joining fees, so George knows he must keep his golf complex in tip top order if it is to remain viable. To this end he is spending his money on the course in a cost-effective manner, before turning his attention to the refurbishment of the club house later in the year.

Three quarters of his players are in the pay and play category. Their numbers are likely to grow now that they can look forward to even better facilities from this substantial investment.
Shelton Sportsturf Drainage Solutions may be contacted on 01507 578288 or see their website: