3 A brighter future for Telford

A brighter future for Telford What a difference a year can make in the life of a football club. This time last year Telford United FC, as it was known then, was put into receivership. Andy Shaw, the Chairman of the club, resigned on the 25th March 2004, passing on all responsibilities for running the club to the remaining directors.

Immediately after this was announced, Telford United Independent Supporters Association (TUISA) started raising money to help the club. On 27th March 2004 United played in the FA Trophy Semi Final against Canvey Island. Volunteers carried out all the work needed to enable the game to take place, including maintaining the pitch. TUISA had raised £12,000 at this point. By 8th April TUISA had raised £17,500 and the players had agreed to a 50% wage deferral to enable the club to finish the season.

On 7th May a Supporters Trust was set up, with a steering group appointed two days later. On 24th May, at their AGM, the TUISA voted unanimously to wind up and transfer membership and funds to the Supporters Trust.

The previous management regime had been responsible for developing the club on many fronts. The old Bucks Head ground club had been transformed into a modern 6000 seater stadium with hotel and conference facilities. The work also included the construction of a new playing surface which incorporated a 100mm fibre sand profile with primary and secondary surface water drainage systems.

However, the club had problems with its new pitch. During the winter of the 2003/2004 season, the playing surface deteriorated very badly, it remained saturated for long periods with a consequential loss of grass cover.

The sand used was a rounded kiln dried 1-2mm Leyton Buzzard grit, which runs freely through the machine ensuring that the material gets down deep into the grooves.

A further 100 tones of sand were applied to the surface and brushed in to restore levels. Heavy rain followed this operation. Chris Jones said " We opened the outfall grid to see water running for the first time, this was very encouraging".

Off the field decisions led to the Football Association indicating their intention to recommend AFC Telford United's acceptance into the Unibond Northern Premier League, Division 1. On July 1st a new full time manager was appointed, Bernard McNally, bringing with him an Assistant Manager, Andy McKnight. Both had been working together for several years at West Bromwich Albion.

After many weeks of negotiation, 5th August saw the Council buy back the New Bucks Head stadium lease and grant the club a twenty year tenure. At last the club had a home and football would continue to be played at this long established football venue.

The Council have now taken on the full responsibility for maintaining the pitch and have put in place staff to ensure it is managed and maintained to the level expected. Chris Jones has been very pleased with the way the pitch has responded to the remedial surface drainage works. Together with the ongoing maintenance being provided by Telford & Wrekins Services's (TWS) fine turf team, he feels that the environment has improved so much that it will now grow grass! 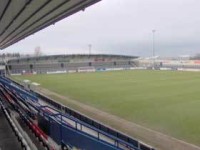 Chris has been pleased with the amount of grass cover he still has (about 55%) at this time of the year, " A year ago when we were called in to remove the sand dressing off the pitch we had about 70% of the pitch totally bare. The programme of drainage, aeration and feeding has helped to improve and maintain the grass cover; it could be better but I think everyone is pleased given the timescales we had".

Knowing that warmer weather is just around the corner, and grass cover will start improving, Chris is already planning the spring fertiliser programme, "The leaching characteristics on sand constructed pitches are so different to our soil constructed Sunday league pitches. We feed more often with quick release products, which allows us to respond to extremes of temperature, rainfall etc to minimise nutrient loss. We apply nitrogen at a low rate throughout the winter period; this does help to maintain grass cover on the pitch".

Recent soil analysis has shown the pitch to be low in potash so a 3/0/20 fertiliser has been applied on three occasions to replenish levels whilst supplying the winter nitrogen requirements. 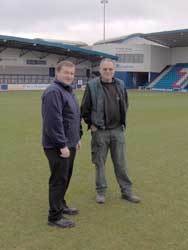 Chris must also convince the club and the Council that every 2-3 years the playing surface will require a complete overhaul, with the top 20-25mm of surface vegetation removed to clean off old surface debris, followed by a re-mixing of the sand profile and topping up with new fibres before re-seeding with new grasses. These operations are essential on fibre sand profile pitches, "I am keen to remove the surface at the earliest opportunity as funding permits, this will help eliminate the ever increasing Poa annua and allow a full sward of ryegrass to be grown'.

With off the field and on the field activities successfully under control the future is looking a lot brighter for AFC Telford United.