Always on the look out for a different story, I felt it would be interesting to find out what the Managing Director of a major international company got up to and the role he plays in running such a company. Having spent some time with David Withers at this year's GCSAA show in Atlanta I decided he would be my ideal candidate.

David is the Managing Director of Ransomes Jacobsen (UK/Europe/Middle East/Africa and India) a position he has held for three years. Under the umbrella of Textron Inc., whose portfolio also includes Bell Helicopters and Cessna Aircraft, Ransomes Jacobsen form a formidable partnership in the making and supplying of equipment for the turf care industry.

Ransomes and Jacobsen were formerly two separate mower manufacturers, from either side of the pond. Jacobsen started life in Racine, Wisconsin in 1921, whereas Ransomes roots go as far back as 1784 in the East Anglian town of Ipswich.

Ransomes started out as an agricultural machinery manufacturer founded by Robert Ransome. His grandson, James Allen Ransome, went
on to make the first Budding patented lawnmower under licence in 1832. Within 20 years Ransomes had sold well over 1,500 mowers. In 1901 they were granted their first royal warrant and, in the following year, were the first company to make a petrol engine powered mower. 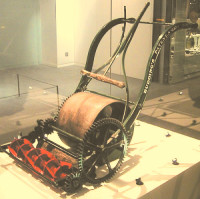 In 1911 Ransomes became a Limited company and were, at this time,employing 2500 people. In 1939, it acquired its present factory site at Nacton, Ipswich. A self propelled Auto Certes mower was first produced in 1958 and remained in production up until 2001.

In 1964 Ransomes produced the world's first tractor-mounted, powerdriven, five unit, gang mower. During the 1970s, the company extended its range to include a self propelled, high work rate, ride on triple mower. This machine became Ransomes' mainstay and was used in many parks and open spaces for the following 20 years.

Jacobsens history began when Knud and Oscar Jacobsen decided to focus on grounds maintenance equipment. One of their early models, the 4-acre, was the first mower equipped with a motor specifically designed for cutting and maintaining turf. The 4-acre had such an abundance of power that it became popular in, of all places, Switzerland because of its ability to climb heavy mountain grades. 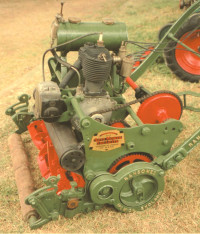 In 1923 the first cast aluminium greens mower was produced to cut fine turf and bent-grass greens without damaging the surfaces. The first rotary mower for home use was introduced in 1955, four reversible cutting blades.

In 1968 the first riding greens mower was introduced, The Greens King™, and quickly set the standard for the turf maintenance industry. In 1998 Textron, a multi national corporation and owner of Jacobsen since 1978, acquired Ransomes, bringing together two of the world's largest mower manufactures.

David Withers began his career with the company in 1992 when he was appointed Regional Sales Manager for the South. Within four years he was promoted to National Accounts Manager, followed by the position of UK Sales Manager in 1998, Sales and Customer Care Director in 2002 and subsequently his current position.

David has been involved in all of the company's restructuring and streamlining activities in recent years. Like many companies they have had bad times as well as good. At the turn of the Millennium they were losing money but, by 2003, they were breaking even. Ever since then, their profits have grown year on year. 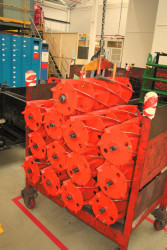 Ransomes Jacobsen are now a completely integrated business, fully accountable for all their own actions and operations which include design, development, manufacturing, sales, distribution, promotion, training and education.

The turnaround in the fortunes of the company have been largely due to the changes made by David and his fellow directors. They began by introducing new working practices based on openness, fairness and clarity.

Investment in new machinery, revised working practices, including improved spare parts distribution, plus the appointment of new operational managers has led to an increase in productivity. Ransomes Jacobsen have a policy of promoting from within whenever possible, but new skills are often appointed from outside. This year alone the company have employed five new supervisors, all fof which were external appointments.

As well as making personnel changes,there was the opportunity to realise some of their extensive land and building assets that had been acquired by the company over the years.

In recent years sales of turfcare equipment in the UK have levelled off. This has been particularly noticeable in the Local Authority sector; much of the work is now carried out by external contractors. Gone, it appears, are the days of the huge LA budgets that 'had'to be spent! So, David places a high priority on ensuring that relationships with existing customers are strengthened at every opportunity. He has implemented a number of initiatives that go a long way to achieving this.

The company run development workshops and demonstration days, inviting existing customers to give their feedback on products and services. They also organise overseas trips for their dealers and customers. This culminates in a visit to all three days of the GCSAA trade show in the States.

This year over 150 of their dealers and clients enjoyed the trip. The latest initiative is factory site visits. David recognises these visits as one of the company's biggest marketing assets, by enabling customers to understand how the products are made, distributed, marketed and serviced. David believes this is a perfect way to not only retain existing customers but also to encourage new business. The expect to show in excess of 1000 people around the site each year.

Recent developments means all the production processes are contained within one building. Raw materials come in one end and the finished products go out the other. Parts are manufactured, welded, formed, shaped and painted to produce the finished product. Even the mowing cylinders are made in house.

David puts a high priority on ensuring that relationships with existing customers are strengthened David with Malcolm Parkinson Under the guidance of Malcolm Parkinson, Operations Director, they have made many changes to their factory environment. They have introduced 'Six Sigma', an American business system that is designed to increase profits by eliminating variability, defects and waste.

David and his managers hold regular structured meetings, and he always attends the quarterly review meetings with all Ransomes staff where he encourages them to have their say. At the same time he updates them the latest developments at the company.

Refurbishments have also taken place to improve the working conditions in the factory. The installation of new flooring has reduced noise levels significantly and also increased operator comfort when standing or walking. A new spares automated filing system has freed up valuable floor space, which can now be utilised for offices for the factory personnel.

A new paint plant, using powder paint technology, has also been installed. This can operate at lower temperatures, thereby reducing drying times. Information boards help keep the workforce informed of management initiatives. There are plans to provide screens with the boards so that real time information can be displayed.

Malcolm and his factory staff are constantly monitoring their performance. A marking system is used to monitor product quality and production.

A Typical week for David involves at least three days in the office and two travelling around the country keeping in governing bodies. He works very closely with his American counterparts, visiting the Jacobsen factory in Charlotte on a monthly basis. When David is at the office he usually visits the factory floor each day, keeping up to date with his staff and all aspects of the manufacturing process.

David sees his role as a delegator and facilitator. He believes he has a team in place to ensure that the company is run efficiently and profitably. The future success of the company, he recognises, is very much dependant on the quality of his staff.

Ransomes Jacobsen are committed to securing ISO 140001, which states that they must 'strive to accommodate and promote ustainable working methods in pursuit of excellence'. Much has already been achieved with most of the materials used in production coming from sustainable sources and the introduction of electric and LPG powered mowers and transport vehicles.

In 2007 Ransomes will be celebrating the 175th birthday of the Budding patented lawnmower. I am sure David, like many of his fellow employees, will be very busy not only celebrating this momentous occasion but looking to use the milestone build on the reputation of this famous, long standing, lawnmower company.