0 A Celebration for John 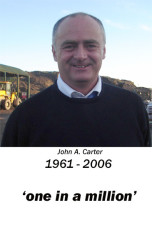 As many of our customers and suppliers are aware, our much loved Sales Manager, John Carter, sadly lost his fight against cancer earlier this month.

John, who was held in the highest regard by all who had the pleasure of meeting him, was laid to rest on Friday of last week at what has been described by many who attended the service of thanksgiving as 'The best funeral they have ever been to'; not a comment usually associated with attending such a sad event, however, I believe the event was one which John would have been truly proud of.

Over 200 friends and family packed out the service at the Crematorium in Bretby, Derbyshire, which was held as a celebration of John's life.

John's sister & Best Man braved the crowded hall to share their memories of John and his exceptional humour. This was followed by prayers and songs, some of which John and Libby, John's exceptionally loving and loyal wife, had chosen for their wedding.

The service was brought to a close by the Chaplain of The Derby Royal Hospital who in John's final weeks had gotten to know and love John. He told of the peace John had found in a small wooden holding cross he had given to him and, although John was in great pain and distress at times, John's main concerns were for those he loved.

As John's employer I had the great pleasure of working with John over the past two years, John became a great friend to both myself, my family and everyone who he worked with at Dandy's.

John was well known as an 'entertainer', someone who would put a smile on your face if you were down. But most of all John was a gentleman, he cared about the people he worked with as if they were a part of his family.

On behalf of all at Dandy's I would like to express our deep sadness that John will no longer be there to brighten up our days with his famous card tricks or his cheesy ring tones. However, we will never forget him and never underestimate the hard work he did and the accomplishments he achieved which will bear fruit for years to come.

We'd like to also express our heart felt sadness towards John's loving family who have fought bravely with John against this terrible disease.

Our deepest condolences to all those, who like us, will miss the one and only John Carter - 'One in a Million'.