2 A cricketer's paradise in Bath

A cricketer's paradise in Bath 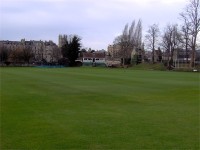 Bath Cricket Club play at North Parade, which is situated next to the River Avon only two minutes walk from the centre of Bath, the famous Georgian city. A cricket pitch has been in existence on the site since 1859.

The club runs four Saturday sides, the 1st and 2nd XI's in the West of England Premier League and the 3rd and 4th XI's in the North Somerset League. On Sundays the club run two sides, and there is a vibrant Youth section with teams from Under 11 to Under 15 playing in local league and cup fixtures. There are also 2 Ladies teams, a Girls squad and a Veteran's team.

The Men's 1st XI have enjoyed considerable success in recent years winning the Western League title in 1998 and the newly formed West of England Premier League in 1999, 2000 and 2003. The club were also losing finalists at Lord's in the National Club Championships in 1998, 2001 and 2003.

With well over sixteen sides the club is fortunate to have a satellite venue, the Brownsword Ground, situated just a few miles out of the city.

The setting at North Parade is very idyllic with a backdrop of fine Bath architecture. The wonderful setting must certainly inspire many of its members. 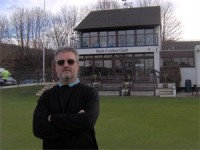 Both grounds are managed and maintained by the current Head Groundsman, Gordon Gill, with assistance from club members. He has been in the position since April 2002. With two squares to maintain and over 200 plus wickets to prepare, Gordon and the team are kept very busy throughout the year.

Gordon has been involved in grounds maintenance for well over 20 years. He is also the ECB Cricket Pitch advisor for Wiltshire and is involved in advising other Groundsmen and assessing facilities within the county.

Over the years the club has acquired a wide range of mowing, rolling, aerating and scarifying machines, such as a Graden scarifier, a Ransomes auto certes, a Jacobsen tri-king, Sisis auto-rake, an auto-roller etc.

Recently, they have been very busy developing a long term playing strategy with the aim of improving the facilities at the club.

Some significant maintenance and repair works have been carried out on the square in recent seasons. Because of its proximity to the river the ground has a high water table, so a perimeter drainage system has been installed around the square. This drains thousands of litres of underground water into a deep well which is then pumped into the river. 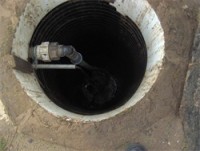 Future works being planned and costed include the refurbishment of the square. The job will involve digging out 150mm of soil material, a combination of silt, Mendip loam, Surrey loam, fibre and thatch, and replacing with Ongar loam. The project will take two years to complete, replacing 6 pitches each year. The work is scheduled to start at the end of the 2005 season, with most of the funding coming from the Community Cricket Development Fund.

Gordon spends many hours preparing and maintaining his facilities. He believes you never stop learning in this industry, there are always new challenges to face from both the weather and the players. He has learned to work with what he has and tries to produce the best wickets in the time he has. Weather is the key factor and usually dictates how, where and when pitch preparations takes place.

Judgement of when and how to prepare good wickets comes with years of practice. The success of cricket pitch preparations is often determined by the amount of time and effort put in by the groundstaff and, in particular, the autumn renovation work determines the standard of the wickets for the following season.

Gordon's end of season renovations take place as soon as possible after the last game is over to make good use of the warm soil and air temperatures for seed germination. As ever, however, the weather usually dictates when and what work is carried out. The square is mown in several directions down to a height of approx. 2-3mm. Leaving a very small amount of healthy vegetation helps the square recover quicker. 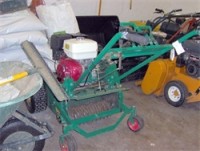 The square is then over sown with a mixture of dwarf perenniel rye grasses, approximately 25kg to every five or six wickets. A fertiliser spinner is used to spread the seed, allowing it to fall into the grooves made by the scarifier, an excellent way to plant seed. If the ground surface is damp enough, a variseeder will be used as well. A combination of the two usually provides excellent results. A 6:9:6 pre-seeder fertiliser is then applied at 35gms per sq. mt. before finally top dressing with loam, 5-6 25kg bags per wicket. This is then worked into the surface using a combination of brushes, lutes, drag mats and ladders. Gordon pays a lot of attention to dragging the loam into the surface. It can sometimes take two or three individuals, with tractors, a couple of hours to complete this task alone. He is not happy until there is very little loose loam left on the surface, and that any vegetation is standing up through the loam and not lying buried underneath.

Gordon has also used the Ecosol Soil Aerator to aid aeration during the autumn renovations and has been pleased with the results.

During the closed season the square is not fenced off, as the club very rarely suffers any vandalism or pest damage. Also, if somebody really does want to walk across the square when Gordon's back is turned, they step over the rope or fence anyway. 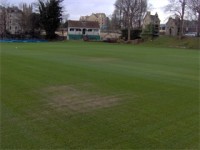 During the winter the square and outfield are maintained at a cutting height of approximately 25mm. Winter aeration is carried out as often as possible, using 9mm tines vertically, through to about the middle of January. However, due to the low lying nature of the ground, the square is often too wet to get on, so hand forking the puddles may be all that is carried out.

Pre season preparations begin in earnest in mid February, weather permitting. Gordon will apply a fertiliser mid February/March to get the grass going, applying a 4:0:4 granular product. Dependant on the soil conditions rolling is undertaken using the weight of the 36-inch Allett Mower to achieve the first level of consolidation to the square, rolling in 3 directions usually across the line of play and then diagonally.

The weight of the rolling will gradually increase, first using the auto roller (un-ballasted) approximately 1.5 tons, again rolling in the same manner, then increasing the weight to about 2 tons.

The speed of rolling is also critical. During the early rolling preparations Gordon prefers to roll smartly across the square rather than go too slow, but reducing the speed gradually over the four to six week rolling programme. At the end of the programme it can take as long as two to three hours to cover the square.

Preparations for the first match are important. The presentation of the wickets, square and outfield must look good, and perform well. First impressions tend to set the scene for the rest of the season.

All the players are keen to start well and have a good game. Often the first few matches will have a low bounce and a lack of pace due to the amount of moisture still in the square, but gradually the bounce and pace improves as the season progresses.

Grass height on the square will be reduced from its winter height of 25mm to 12mm in stages, mowing on average 3 times per week. The finished height of cut for wicket preparations is 3mm.

The outfield is cut with the Jacobsen triple mower at least four times per week to a height of 9mm, and spiked throughout the year with a tractor mounted Groundsman Aerator, when it is available.

Wicket preparation starts 10-14 days before a game. Gordon likes to do this by hand, taking up to three or four hours at a time to hand water the wicket, ensuring the water gets down below 100mm. The wicket is then allowed to dry for 1-2 days prior to rolling with the 2-ton roller, averaging half an hour rolling per day. Finally the crease is marked out using string lines.

Once the wicket has been used, Gordon's repair regime consists of watering (soaking the strip if required), scarifying using the Graden set at approximately 3mm using 2mm blades, spiking between 25-75mm and over seeding/ op dressing with loam at a rate of four 25kg bags per wicket. Once completed, it is covered with a germination sheet. This gives Gordon the opportunity of being able to reuse the wicket after 6-8 weeks if required.

Gordon sets himself high standards to achieve and, with the Bath Cricket Club being so pro-active both on and off the field, Gordon can scarcely rest on his laurels. The club is continually striving to improve their standing in the cricket world and are currently putting a bid together to modernise their existing facilities further.

The club wants to replace the existing buildings at the North Parade ground with a new unified building consisting of a clubhouse and a four-lane indoor cricket school. Bath & North East Somerset Council has given full planning approval for the redevelopment. The club, together with its development partners, will now be able to formally begin the challenging task of funding the project.

The original clubhouse, The John Ruddick Pavilion celebrated its 100th year in 2004, and still remains a prominent feature at the ground.

Let's hope the proposed new facility gets underway and enables Bath Cricket Club to continue the game at North Parade for another 100 years.

For further information about the club can be see on their web site: