0 A day in the life of a matchday Groundsman

I arrived at Filbert Street at about 8.00am Saturday, a little later than anticipated due to the autumnal fog along the A5 and the M69. Chris and his able assistant Ed were preparing the mowers ready for the match day final cut. 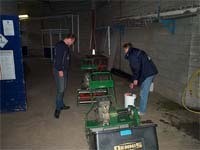 It was equally gloomy inside the stadium, with the dense fog blocking out any morning sun as Chris put out a string line across the pitch, alongside the six yard box ready to 'mow in' the bands. At 08:20 the two Dennis 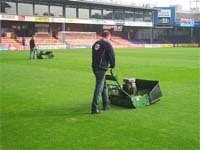 Chris pointed out that if the dew that was settled on the pitch had been heavier they would have brushed the pitch in advance of mowing, but given the time scales allowed and the fact that the mowers were doing the same job he didn't see much point. However the damp grass clippings had to be removed from the rollers and the sides of the machine periodically to stop clumps of wet cuttings being left on the pitch. 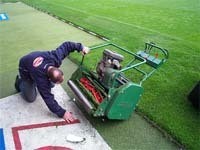 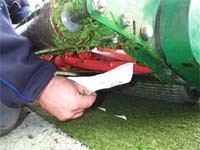 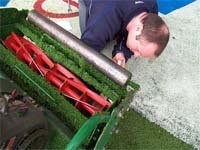 While Ed brought out the rotary mower to trim the grass surrounds, Chris prepared the marking paint. He normally uses neat marking compound for a match day mark out, and then applies it using a wheel transfer machine. Once Ed had finished mowing, Chris set out the string lines for the marking. 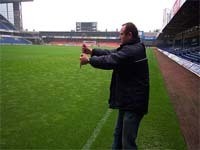 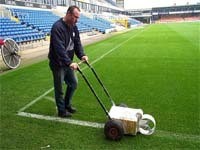 As the marking was allowed to dry, the string lines were wound back up and put away, the mowers were washed 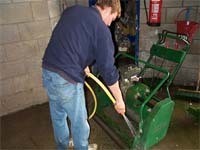 It was now 11:25, so Chris and I took time to move the vehicles away from the stadium to a secure car park- we still hadn't stopped for a cup of tea!! We picked up a set of programmes for the match day staff and arranged for some lunch vouchers on the way back into the stadium and took time out to have a brew and a chat.

At midday we were back out, we walked the pitch, picking up litter and lumps of cut grass and removing a couple of presents left by the resident cat (Nice!). 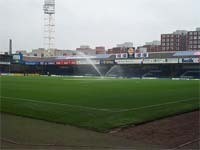 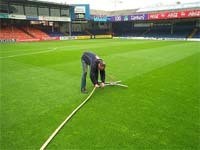 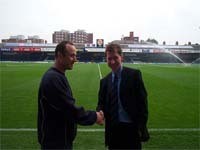 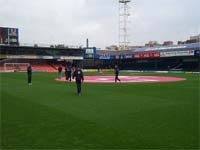 We took our seats and drew breath from what had been a busy morning. Even now the worry hadn't stopped, as Mr Wolstenholme blew his whistle for kick off, Chris had his attentions on the way the pitch was playing.

For the first half an hour there was little in the way of divots coming out which was encouraging, but the surface seemed very greasy and a number of players found it hard to keep their feet. Chris was making mental notes about the state of play so that he could perhaps tweak the irrigation timings for the next game under similar conditions. As Chris said 'The trouble is you rarely have two similar games so these mental notes may not be used for another couple of years, but then groundsmanship is all about gaining experience'. 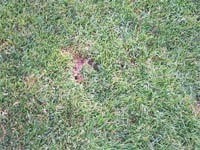 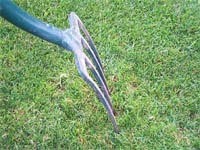 When the final whistle came, the Filbert Street ground staff were back on the pitch with their trusty forks, working in front of Chris and Ed 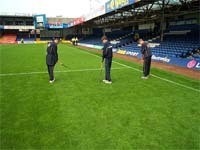 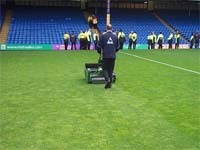 By 18:45 the pitch looks almost like new and can now be left until work resumes on Monday morning. It has been a long day, but all the hard work has been somewhat repaid by a resilient Leicester City performance which resulted in a draw against the premierships new boys Fulham.