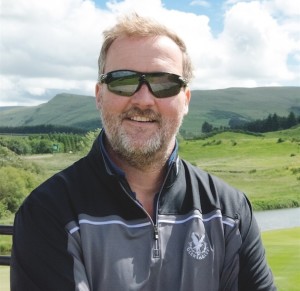 A lover of cricket who began his work on grass tennis courts, Steve Chappell is the head greenkeeper at Gleneagles and has worked at the last two Ryder Cups on British soil.

I got into greenkeeping by accident as much as anything else. When I was growing up, all I wanted to do was play cricket.I started off as a trainee groundsman on grass tennis courts.

I worked there for a year and then there was a job advertised for an apprentice greenkeeper at Bath Golf Club. My mother applied for it on my behalf and I got it.

After the first few months, I felt at home with greenkeeping and working outside, which is something I love.

The best part of the day is first thing in the morning, when there's nobody else around. You see the sun coming up and it's great.

I was at Bath for four years, and worked at various courses before taking up the head greenkeeper job at Neath in South Wales in 2003.

It was a real restoration project and it was great. I had a great eight years in Wales and, in the last stages of that, I got involved with Jim MacKenzie at Celtic Manor in the lead up to the Ryder Cup in 2010.

It made me feel that I wanted more from my career than Neath could offer. It's no disrespect to Neath, but it was never going to be any more than a very good traditional members golf club.

I knew there was an opening at Gleneagles and I started working here in October 2011.

I used to play golf. When I was an assistant greenkeeper at Bath, my day finished at 2.30pm.

I spent a lot of time with one of the assistant pros at the club and went from being someone who didn't have a handicap to having a handicap of 12 by the end of the summer.

We were playing three or four times a week. That was the peak of my golfing career to be honest.

I live next door to the maintenance facility and my alarm goes off just after 4.00am.

I wander across the yard, unlock all the sheds, fire up the computers, check my emails, check the weather, check the rain gauge, and see what the temperatures were from the day before.

Then really depending on what our head count is for any given day, I could go out on the greens, I could do the bunkers with the guys, just basically fitting into any gaps.

You can read the full article from Bunkered HERE