"When some of the last remaining coal mines were closed, it meant that many of the underground water pumping systems were turned off, resulting in the water table rising"


Hart Common Golf Course was officially opened in 1995. The 18 hole parkland course is privately owned by Peter Roberts and is fast becoming one of the best pay and play courses in the north west. It is locally known as the West Houghton Golf Centre.

The course, situated just outside Bolton, is owned, managed and maintained by Peter, his wife and three children, Richard, Claire and Catherine. They all work on the course on a daily basis, undertaking all the usual greenkeeping jobs. Catherine is a keen golfer, currently playing for Lancashire and making a name for herself on the golfing circuit.

Peter originally bought the land back in the 1980s, and spent a number of years farming it, running a dairy herd. However, in the early 1990s, he realised that he could possibly earn more money if he transformed his land into an 18 hole golf complex.

So, in 1994, he enlisted the help of Loates Brothers construction and spent a year transforming the farm into an 18 hole parkland course. Greens and tees were constructed using the existing topsoil, ameliorated with local sand. Greens and tees had a primary drainage system installed.

Like many young courses, Hart Common took time to settle down and improve. In the late 1990s there were flooding problems, with areas of the course lying so wet that it would often have to be closed, especially during the winter months. Peter wanted to find a solution and, at the time, investigated the cost of drainage and sand dressing his fairways; it equated to close to one million pounds in materials, money he simply didn't have.

He was also keen to find out why the water tables on his land had risen in recent years, contributing to the flooding problems. Most, if not all the land around West Houghton had been heavily mined for coal and, when some of the last remaining coal mines were closed, it meant that many of the underground water pumping systems were turned off, resulting in the water table rising which, in turn, created a number of springs that flooded the new course.

Peter and Richard felt the only way to combat the flooding problem was to raise the height of the course in the prone areas. In some cases, this meant raising the 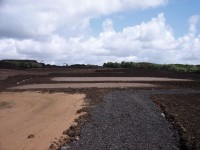 land by at least three metres. With this in mind, he made enquires about sourcing local materials. Planning permission to redevelop the course was applied for, using landfill materials from local building developers. They would charge the developers a going rate for tipping their spoil, with this money being invested back into the course.

So, in 2004, with the help of international golf course architect Simon Gidman, they began importing huge amounts of spoil to rebuild the course. The timing was perfect, the housing boom was in full swing and the developers could not move the spoil in faster than it was being used out on the course, even though thousands of tonnes of material were arriving on site on a daily basis.

The original idea was to employ contractors to come in and rebuild the course, but Peter and Richard decided that the cost would be too prohibitive. They then looked at the hire rate of the machines but, again, over a six year period, at £700,000, this also proved too costly. 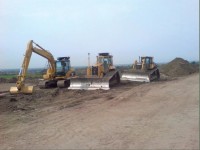 In the end, Peter took the bold decision to buy the equipment himself, which was a much cheaper option, and do the work in stages, aiming to rebuild three holes per year. The decision was made easier knowing that they could utilise the latest GPS technology to help set levels.

What was remarkable was that the course was kept open for play for the whole duration of the rebuild. This was achieved by building three additional holes at the start of the project.

So, for the next six years, not only were they building three brand new holes a year, they still had to maintain the course for play. It was all hands on deck - a truly family affair with everyone either building or maintaining the course.

The course rebuild was finally completed in 2010. As with any new build, the growing in and settlement of the course was paramount, getting the greens up to speed was a constant challenge, especially with the ever changing weather in the north-west.

The services of agronomist, George Sheils, were employed to provide an independent view on the condition of the course whilst, at the same time, recommending a number of maintenance tasks to combat any problems.

The greens are mown daily at between 3-5mm. Greens mowers are fitted with brushes and it is quite usual for the staff to brush them first with a GreenTek brush, and then give them another brush during mowing. Turf irons are also used to help firm up the greens.

Peter and Richard are mindful that they need to maintain and keep improving the quality of the greens, as they tend to be a bench mark for the course and help bring in new customers and retain existing ones.

They undertake a robust maintenance programme, making good use of the machinery they have acquired. Being from a farming background, they understand the benefits of having the right equipment to do the job, and when to use it. Very seldom does any of the equipment remain unused in the shed.

Greens and tees are aerated on a regular basis to maintain porosity and help combat thatch levels. The Toro Pro-core is in constant use, as are their sarrell rollers. Topdressing is carried out monthly using a combination of soil and sand dressings.

The feeding programme centres around applying no more than 140kg/ha nitrogen per year to encourage the finer grasses. A combination of granular and liquid products are applied.

Peter has just invested in new equipment to apply foliar feeds and soil drenches, buying a Toro 5800 Multipro sprayer fitted with hoods, and two unique LiquiJect aerators that, currently, are the only ones in the UK.

The reason for their purchase was to help combat a nematode problem which has occured since the new greens were built. After much research, and working closely with Dr Colin Fleming and Dr Kate Entwistle, they were able to identify the types of nematodes, and it turns out that, in most cases, they were imported with the topdressing. Whilst these nematodes are one of the most common organisms on the planet, well maintained soils is the perfect breeding ground for them.

Since 2009, Peter has carried out a number of trials for Colin to help establish what products help suppress nematodes, and to what extent. In most cases, the products have to be applied in liquid form, but the outcome is often dictated by weather conditions, state of the soil and the timing of the operation.

It is critical that the timing of the application is made when the nematodes are most active and have just hatched from the egg stage, which is their most vulnerable state. Generally, soil temperatures and soil moisture need to be at optimum levels to facilitate the lifecycle of the nematode. Once soils get to around 5/6 degrees centigrade, alongwith plenty of moisture in the soil, the nematodes become active.

After working closely with Colin, and trying out all manner of treatments, they have, between them, developed a method that seems to work very well in suppressing nematodes.

The one problem with overhead spraying is ensuring the ground conditions are right for an effective application. The material needs to get down to between 25-50mm to come into contact with the nematodes.

It was after some detailed research on the internet that Peter came across the LiquiJect, a solid tine wheel aerator that injects water and active ingredients into the soil below the canopy and thatch layers.

These machines are more commonly used in the agriculture sector to get material down into the soil profile. Peter was keen to try it out on his golf course so, earlier this year, he spent £40,000 on importing two machines into the UK.

He has been using the machines to aerate and apply liquid feeds into the greens and tees. There is some minimal disruption to the surface but, overall, the results have been very good.

Peter and Richard have been trialing a new liquid fertiliser that not only feeds the turf but also suppresses nematode activity. Lab tests and field trials carried out by Colin help confirm the decline in nematode numbers, especially on the most prolific species - Meloidogyne J2(root-knot), Tylencorhynchus (stunt), Hemicycliophora (sheath) and Helicotylenchus (spiral).

All nematodes pass through an embryonic stage, four juvenile stages (J1-J4) and an adult stage. Juvenile Meloidogynes hatch from eggs as vermiform second stage juveniles (J2), the first moult having occurred within the egg. Newly-hatched juveniles have a short free-living stage in the soil, in the rhizosphere of the host plant. They may reinvade the host plant of their parent or migrate through the soil to find a new host root.

Colin's research has shown that the ideal times of the year to apply products - the J2 stage of the nematodes life cycle - is in April/May and October/November so, based on this, Peter now aerates the greens and tees using the LiquiJect during the spring and autumn renovation programmes whilst, in the interim months, the greens are sprayed using the Toro Multi Sprayer with a shrouded hood fitted.

Early season tests, last year, showed severe nematode activity in February, much earlier that previously thought. It may be the case that hatch times are dependant on ideal conditions

Using the LiquiJect aerators seems to ensure that any of the nematode suppressant products are getting straight to the target areas more effectively. Peter also sees the potential of the LiquiJect aerators being used at other clubs across all sports disciplines that currently suffer with nematode problems, and is offering his machines and methods for hire to local clubs.

Nematodes will remain a constant problem on many of our modern sand based sports surfaces. Each year, we find out more about them and how to deal with them; they will never go away - it is knowing how to manage them that is important.

It's good to see forward thinking turfcare professionals, like Peter and Richard, continuing to come up with solutions for solving the some of the issues we, as an industry, face whilst striving to produce better playing surfaces.