0 A feast of equipment in Holland 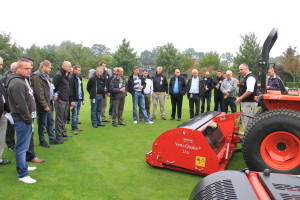 For over 30 years Charterhouse Turf Machinery has been providing Groundsmen and Greenkeepers with professional maintenance machinery to keep their playing surfaces in a first rate condition. Probably best known for its iconic Redexim Verti-Drain™ aerator, the company's range has constantly evolved and expanded to not only offer aerators, but also topdressers, overseeders and scarifiers for natural turf.

The growth of synthetic surfaces has seen Redexim develop, during the past few years, maintenance equipment specifically for this emerging market. Today Redexim Charterhouse Turf Machinery can offer one of the best ranges available. Together, they suit the needs of all Grounds Professionals from pedestrian units, to treat small areas economically, to PTO driven commercial units for larger spaces.

To help celebrate 30 years of innovation and the fact they have now brought over a hundred products to market the company fittingly organised an open day aptly named Deep Roots' Demonstration day, inviting ninety plus, dealers, customers and members of the press to attend the day at Kromme Rijn Golf Course in the town of Bunnik, on the outskirts of Utrecht.

The idea for the event was the brainchild of Charterhouse General Manager Nick Darking who initially hoped to attract at least 50 people, However, it soon became apparent that the opportunity to see most of their key products in one location appealed to everybody they asked. 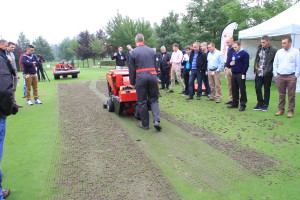 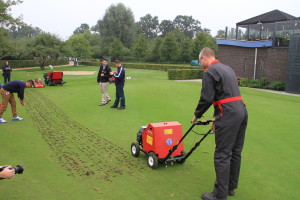 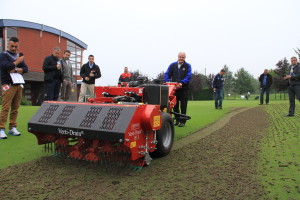 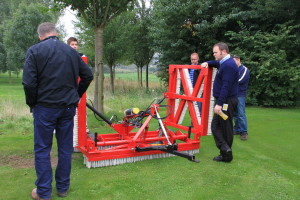 Whilst not all of Redexims' 100+ machines for Natural Turf maintenance could be on show there was a good mix of each product type along with the first showing of a prototype double disc seeder.

The press had arrived the previous day to allow us the time to take in a factory tour and then meet up with the invited dealers and customers at the golf course. I was pleased to see they had invited Billy McMillian whose father Jack, along with Walter Woods, and both leading greenkeepers of their day had initially trialed some of the very first Verti-drains back in the late 1970s.

Billy gave a fantastic presentation - 'Haven't we come a long way' - that highlighted how cultural practices had changed in the last forty years with the innovations in machinery. Billy was keen to talk about how the industry had changed, his views on greenkeeping and what the future held for the next generation of greenkeepers and groundsmen.

The delegates where then split into four groups, with each group spending 40 minutes at each machinery station, where they had the opportunity to see the products working and ask questions. 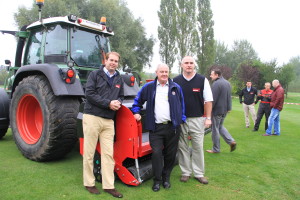 There was a good mix of delegates, including some leading football club groundsmen and golf greenkeepers.

The first station focused on scarification, aeration and coring machines for golf greens and fine turf, with several pedestrian scarifers and verticutters on show, including the versatile pedestrian self-propelled Carrier system.

The next station featured the company's Turf Tidy 3000, a compact sweeping machine, incorporating dethatcher, verticutting and flail cutting options; a well built, sturdy machine that can carry out several operations when drawn with a 35hp tractor.

Also on show was their tractor mounted Sodcutter 610 that takes the hard work out of manhandling a pedestrian turf cutting machine. I am sure it will be a favourite tool for greenkeepers, especially on links courses, where heather management could benefit from using this machine to clean off ground to allow heather seed banks to germinate. 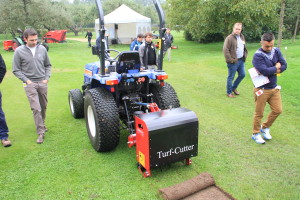 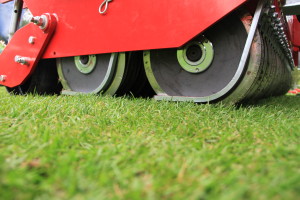 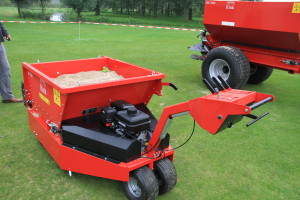 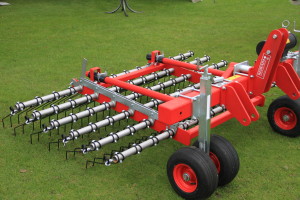 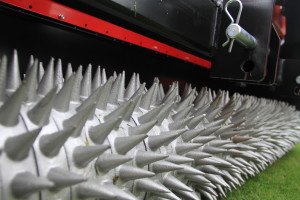 Station three featured some of the newest Verti-Drain models, including the new high-speed Series 1513 and 1517 that can run at 4.4km/h (2.75mph) .The company also had their Verti-Quake 2521 linear aerator on demo. The company now offer over 16 different versions of the Verti- Drain aerator to cope with the ever demanding needs of its customers.

The final station saw the company showing off their range of spreaders, topdressers, seeders and brushes.

One of the most interesting new products was the dual reel seeder that can sow seed at 30mm centres. This machine also has a ribbed roller in the hopper that helps protect and handle the seed. It was a certain favourite with the delegates, along with the new double powered sweeping brush that has become a popular method of brushing in topdressings on golf courses.

Some of those delegates were happy to share their thoughts: Nigel Brown, General Manager at Prenton Golf Club thought it was "fantastic" and "a very slick operation; thoroughly enjoyable." Others, like Derek Thomson, Head Greenkeeper at Wynyard Golf Club, were attracted to particular machines, "I'm very impressed by the new Speedbrush," he said. "I think that's fantastic and the new Hi Speed Verti-Drain also appeals to me!"

Alan Ferguson, Head Groundsman at the FA's St Georges Park, remarked on the fantastic range of equipment and was pleased to see the company investing in developing new products. He thought the Carrier system would go down very well at football clubs. The ability to attach several components on one primary mover would be a good long term investment..

All in all it had been a very successful day. Herman de Bree, Sales & Marketing Director of Charterhouse Turf Machinery, along with his father and the rest of the Redexim Charterhouse employees would have been delighted with the outcome of their first major event on home soil.