0 A field of stubble to a field of dreams

LARRY'S A SUCCESS - AND NO MISTAKE 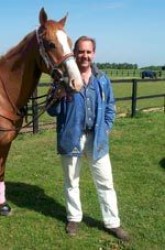 Today, the Club's pitch is of a high enough standard to host International matches and top charity events. But in the early days, it was somewhat different. "We decided to build the polo pitch on set-aside land which, when we acquired it, was a field of stubble," recalls Larry, who plays polo himself and is on the Council of the Hurlingham Polo Association - the sport's governing body. "Looking back we made mistakes, but we learned from them."

"We began by trying to level the ground. Previously, the farmer who owned the land had continually harrow-ploughed the field, and always in the same direction, creating ridges. We undertook back-breaking work, replacing 17 tonnes of soil, and at one time we recruited friends and family to work round the clock to prepare for a Cambridge vs. Oxford Varsity Match."

"We constantly rolled the ground to level it - but ended up by having 14in of compacted soil above a chalk subsoil, leading to patchy grass growth. So we decided to spike the ground intensively, using equipment that penetrated to a depth of 8in. It worked, but in the process we brought up a huge amount of flint. The ground looked like a pebble beach! We eventually cleared the stones and decided that we should re-seed in the autumn."

Larry and his staff decided to get expert help from the STRI (Sports Turf Research Institute), and after reading the Institute's "Turfgrass Seed" Guide, which lists the most successful grass cultivars, he contacted Barenbrug UK to advise on the Club's mixture requirements. "Barenbrug's Sales Manager, Ben Petitjean, and his team have been enthusiastically involved from day one," says Larry.

To get the pitch off to the best start, Barenbrug also suggested Bar 9, which gives fast germination and rapid establishment to 'nurse' the more sensitive grasses and boost wear tolerance. Bar 9 comprises 40% each of the perennial ryegrasses Chargall and Barmona, plus 20% Rumba strong creeping red fescue. The mixture has high wear tolerance, even under low-maintenance regimes.

The result is a top quality pitch that withstands the intensive pounding of horses' hooves and gives the true playing surface that players require. And Larry and his team are still keen to develop further. "With Newmarket Racecourse on our doorstep and many vets associated with the complex among our own Club members, we've learned a lot about the conditions that horses need. In fact, to be successful you have to put the needs of the horses before those of the players, when it comes to turf management.

If the ground is too soft, for example, tendon injuries can be sustained. Equally, if the ground is too hard, concussion of the joints can occur. In fact, over a 12acre field, the land has to be totally consistent as a mixture of hard and soft can also create injuries." Establishing a high-quality polo facility has also enabled Larry to fulfil a personal ambition. Three years ago, he created the world's first polo team for disabled youngsters. The pleasure they derive is testament indeed to the perseverance of Larry and his hard-working team.