Steve Thompson's motto says it all. His tireless conservation work at John O'Gaunt Golf Club has seen him win numorous awards, and he has even made an appearance on BBC local TV to talk about his work. He is certainly flying the flag to help alter the perception many people have of golf clubs

Through our everyday management, there is lots we can do to help encourage wildlife. Not everything has to be cut all the time. At John O'Gaunt, out of play areas are left to grow long through the spring and summer months and are cut and collected in the autumn. This helps to encourage insects and small mammals and also encourages wildflowers to start growing in these areas.

We have also tried to create wildflower areas too by preparing an area and sowing wildflower seed. In 2011, we were the first club to sign up to Syngenta's Operation Pollinator to help encourage bees and other pollinating insects. 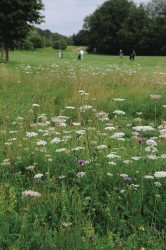 An area was chosen that was quite bare and out of play, but close to where golfers walk. The ground was prepared by scarifying it to leave about 60% bare soil and a wildflower seed mix was sown which contained seven species: Bird's Foot Trefoil, Self Heal, Red Clover, Lady's Bedstraw, Field Scabious, Wild Carrot and Black Knapweed. We didn't expect that much the following year, but we were in for a big surprise.

2012 was quite a wet year so may have had an impact on the growth of the grass around the course and the wildflowers. The Operation Pollinator area was a huge success in its first year, all seven species of wildflower flowered, and it looked fantastic. Since its first season, we have found five species of bumblebee plus numerous butterflies, moths and other insects like grasshoppers and crickets.

Once the wildflowers had died down in the autumn, we cut and collected everything but, instead of just dumping the clippings, we spread them on another area to disperse the seed and increase the wildflowers around the course.

In 2013, the Operation Pollinator area was looking fantastic again with more of all the species of wildflower spread more evenly. Since then, other areas around the course have been sown with wildflower seed to create more habitats for our native bumblebees. At the end of 2013, I sowed some Yellow Rattle in a few places as a trial to help combat the thicker grasses rather than use chemicals. This seems to be doing very well and the bees are loving it, so even more will be sown.

We also provide homes for many species of bird in the form of nestboxes. There are now over one hundred nestboxes covering both our courses - The John O'Gaunt and Carthagena. Blue Tits, Great Tits and occasionally Robin, Coal Tit and Nuthatch use the small boxes. The bigger boxes are used by Kestrel, Barn Owl, Stock Dove, Jackdaw and sometimes Grey Squirrel.

I check the nestboxes in the spring and I am now able to ring some of the chicks. Most years, we have around 400 chicks, mostly Blue and Great Tits. The boxes are cleaned out in the winter and repaired or replaced, where necessary, due to squirrel or woodpecker damage.

The response from the club management and the members is excellent. There is a wildlife noticeboard in the clubhouse where they can record sightings and I write an article in the quarterly club newsletter. Members are always coming up to me whilst out on the course and telling me stuff that they have seen, and I often get asked to help identify something or asked for general wildlife advice. There are often evening walks for members and local people looking for wildlife, whilst local experts often come in to help lead Bat walks. I organised for guest speakers to come to the club to do a talk about Owls and Swifts; these both went down really well with those that attended and more are planned for the future.

I have always been interested in birds so working outside and being able to enjoy my hobby at the same time has been very rewarding.

Over the years working at John O'Gaunt, my interest in all forms of wildlife has grown sustantially leading me to come up with a motto - a golf course is not just a golf course. I try to get the message across to the members, local people and beyond that a golf course can really be a good place for wildlife. I have written articles for the local paper, various magazines and even appeared on BBC local TV.

All the work I have put in, plus the media coverage, has brought the club a lot of success with local and national organisations. We won the Nature Conservation Award at the 2013 BIGGA Golf Environment Awards and were runners up last year for Environmental Golf Course of the Year. We have also won awards with the Bedfordshire branch of the C.P.R.E. The club are now corporate members of the RSPB and we are hoping to work with them on future projects in educating people that - a golf course is not just a golf course!