David Croxton is a man on a mission. As proprietor of Cold Ashby Golf Club he implemented the construction of nine new holes and has now moved on to an ecology programme with the assistance of the STRI. And, if that wasn't enough, he is also a member of the EGU's Executive Committee!

Our editor heads down Northamptonshire's leafy lanes to meet him

David Croxton, the Proprietor of Cold Ashby Golf Club, is a man who has made owning a golf club a true lifestyle experience. He took over the course in 1978 and has, since then, lived and worked at this delightful venue which, at the time of his purchase, occupied 130 acres of undulating Northamptonshire countryside.

David, a keen golfer himself, soon began to develop the club further, both on the course and the clubhouse facilities. However, a significant development occured in the early nineties when 60 acres of adjacent land was obtained and an additional nine holes were built.

Construction of the new nine holes began in 1992 and was completed the following year. The greens on the new nine were constructed to USGA 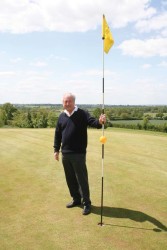 specification and, at the same time as these were built, the opportunity was taken to upgrade and extend the irrigation system across all 27 holes.

The new greens were gradually brought into play during the summer of 1994. The official opening finally came on Captain's day in July 1995.

The club can now offer three loops of nine holes, which can be conveniently mixed and matched, allowing both players and greenstaff the luxury of flexibility and variety, especially important when over 35,000 rounds are played each year.

David has continued to improve the condition of the course at every opportunity. The original eighteen greens are soil push-ups and these have had new drainage installed. In addition, tees have been reconstructed and bunkers have been repositioned.

The club employ five full time staff. Henry Bott has been at the club for eighteen years, he was promoted to Course Manager five years ago. His deputy is Ian Favell, who has been at the club for four years, and they are ably assisted by Roger Miller (8 years), Ashley Hammond (1 year) and Andy Clark, the newest recruit, having started in June of this year.

The club has a policy which allows it to close nine holes for renovations and refurbishments. This enables topdressing operations, for example, to be undertaken and completed within a day without having to worry about golf traffic. This allows the staff to make best use of their time and, importantly, the weather conditions.

Greens are cut daily in the growing season, with tees and fairways cut two or three times a week depending on growth.

As well as running the golf course David has also taken a keen interest in the management and governance of the game and was elected to the executive of the Northants Golf Union, subsequently becoming President in 1998-2000. This led to a position on the English Golf Union (EGU) Executive, and he took on the role of Chairman of the Club Services Committee in 2005. This Committee has an important role to play in informing and advising golf clubs in club and course management issues.

David maintains a close rapport with the EGU's Club Services Manager, Paul Keeling, who is based at Woodhall Spa. In the current climate more clubs are seeking this advice as they have to contend with tightening budgets and climate change.

The EGU has a number of initiatives in place, including a series of roadshows. In addition they have a joint venture with English Nature on ecology programmes and also support the R&A on sward improvement.

In typical hands-on fashion, David has implemented both these schemes at Cold Ashby and he feels that, by doing so, the presentation of the course has considerably benefitted as a consequence.

Staff from STRI were appointed to advise and monitor the progress of both the schemes.

Cold Ashby were accepted into the third batch of golf clubs under the English Golf Ecological Advisory Service in partnership with the EGU, Natural England, The R&A and STRI. The club have since received two consultancy visits from Lee Penrose, the STRI's Senior Consultant within the Ecology and Environment Unit, and have achieved tangible gains for both golfers and wildlife out on the course.

Under the scheme each club is set a series of targets, which are aimed at improving the wildlife value of the course whilst taking into account the aesthetic and strategic interest for the golfers.

At Cold Ashby, these targets included the development and appropriate management of deep rough, pond improvements and management of the degenerate gorse and wooded areas. The club embraced these issues and implemented an eighteen month ecological improvement programme between 2006 and 2008. 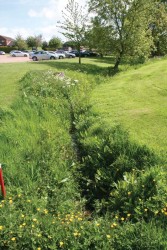 As a result, the course now features several hectares of well positioned and properly managed deep rough, providing visual interest for the members and playing host to a variety of wildflowers, birds and butterflies. The water bodies throughout the course have been transformed into deep, clear pools with native vegetation around the perimeters attracting damselflies, dragonflies and breeding birds such as coot and moorhen. Previously, degenerate woodlands and pockets of gorse have received management attention and are now showing good signs of revival.

The club were assessed against these targets this summer and, having implemented all of the work asked of them, have been awarded the English Golf Ecological Environment Award.

Lee Penrose said about the improvements, "To achieve so much in such a short space of time is a credit to the club and its staff. The projects have been widely acclaimed by the golfers, and ecological management has now been integrated into the ongoing management of the course."

In addition to all of the above, the club have also installed an STRI designed Reedbed Filtration System for the treatment of wastewater following machinery washdown. The system was constructed during last winter and spring and is now fully operational, reducing the environmental impact of the facility even further.

The R&A Sward Improvement Scheme was monitored by the STRI's Henry Bechelet.

The aim of this scheme is to demonstrate, over a four year period, how the sward species composition can be developed. Henry's role was to set the plan in place and visit at least twice a year to review progress and make further recommendations.

The scheme created an interesting situation, with the STRI working closely with the club's agronomist, Peter Jones. The existing sward composition (predominantly Annual Meadow Grass) was being well managed with Peter's guidance and the putting surfaces were in very good condition. As such, there was no immediate need to change, so Henry worked with Peter to try to gradually alter the emphasis of the programme to maintain playing qualities and develop the sward.

The other interesting factor in this project was that David, being the proprietor of the course, was very much concerned with the costs and the benefits of changing what wasn't really a broken situation. There were many interesting and in depth discussions, and these have been the driving force for a number of Henry's 'Disturbance Theory' articles.