by Peter Britton
in Golf, Conservation & Ecology, and Renovations & New Builds
on 10 Jan 2015

0 A greenkeeper - man and boy! 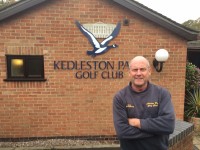 Joining a club straight from school, and still being there forty years later, is something of a rarity. Yet, that is exactly what David Leatherland, Head Greenkeeper at Kedleston Park Golf Club in Derbyshire has done. In this article, he tells Peter Britton that his passion for the job still remains strong

The course at Kedleston Golf Club opened for play in 1947, having moved from the Markeaton Golf Club, which is now the site of Derby University, Kedleston Road Campus. The expansion of Derby during the 1930s led to its closure in 1938 when the area was earmarked for development. The Markeaton club had been formed in 1895 and was one of the founding clubs of the Derbyshire Union in 1913. When closure was imminent, the club commissioned respected course architect, James Braid, to design a course over mature parkland in the grounds of Kedleston Hall, 820 acres of parkland designed by the then little known architect and landscape gardener, Robert Adam, and now managed by the National Trust.

James Braid was a Scottish professional golfer and a member of the 'Great Triumvirate' of the sport alongside Harry Vardon and John Henry Taylor. He won the Open Championship five times between 1901 and 1910. He is sometimes regarded as the "inventor" of the dogleg.

The onset of the Second World War, during which time Kedleston Hall formed one of the Y-stations used to gather Signals Intelligence via radio transmissions which, if encrypted, were subsequently passed to Bletchley Park for decryption, meant that construction could not begin until 1946. By this time, Braid had retired, so John Morrison and Harry Colt were invited to prepare a new course design. Two companies were approached to construct the course, J R Strutt Ltd (whose proprietor, John Strutt, was an old colleague of Braid) and Frank Harris Ltd. The machinery to maintain the course was obtained from the now defunct Markeaton Club. The course was one of the first to be created after the end of the war.

Kedleston Park has been further developed over the years whilst keeping its original layout. It is a respectable 6920 yards in length with a par of 72 from the Championship tees. The feature holes are the 151 yard, par 3, 7th and the 358 yard, par 4, 10th. The 5th green is protected to the left by a large copper beech tree, with the lake behind. A Robert Adam designed bridge provides a backdrop

. The 7th again features the lake which guards the front of the green. The greens were reconstructed in the late 1990s to USGA sand based specifications.

For over half of its history, Kedleston Golf Club has been tended by David Leatherland who joined the club straight from school in 1974, completing his City & Guilds in his formative years. He was promoted to Head Greenkeeper just four years later at the tender age of twenty.

Therefore, in 2014, he celebrated his fortieth anniversary, and it is testament to his love of the club that he continues to move with the times to produce such fine surfaces for golfers to play on. 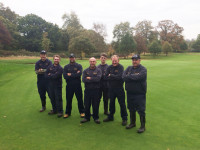 David has a team of six to assist him. His deputy is forty-six year old Paul Roe who has been at the club for eighteen years. Greenkeeper/Mechanic Adrian Mellor has seventeen years service, with first assistant Frazer Harrison (seven years) and youngsters Christian Hardy (two years) and Ben Archer (one year) completing the team. Patrick McCabe has recently joined on an apprenticeship scheme which, David confirms, is "going okay; it's early days."

Apart from employing the services of agronomist Adam Newton and contractors for some of the heavy work, all work is carried out in-house. All staff are compliant with current legislation and, to keep up to date, are provided with ongoing training.

David is responsible for his own budgets. Machinery is generally purchased on a five-rear replacement basis, with Toro and John Deere machinery forming the main fleet. Toro machinery is purchased from local dealers P S Marsden, whilst the Jon Deere kit is bought from Henton & Chattell.

The recent purchase of a Wiedenmann GXi HD Terra Spike from local dealers Henton & Chattell has seen the machine become a firm favourite. "After a visit to BTME and a very thorough on site demonstration, the deal was struck," he states. "For lots of reasons it just suited us … its size; our type of course - our greens are built on sand with everywhere else being clay-based; and the fit with our tractor. It was simply the right machine. Its main focus is to pencil tine all the greens, which we do on a monthly basis."

The greens are cut at 3mm in the summer, rising to 5mm in the winter. In addition to pencil tining, they are slit tined in the winter and scarified in spring and summer to 10mm.

"My main overseeding is always done in late spring, around about mid-April, although I do a bit of repair work if needed, after a lot of play in summer, at the back end of the season. Tees are always topdressed and overseeded on a regular basis. We work very hard, particularly on the greens, which we always like to keep at the best possible standard. We keep at it all the time. It's a very hands on approach. Presentation is very important; not just to me, but also our members."

Asked if he uses temporary greens, David replied; "yes, but only if there's been a heavy frost. I would rather call them frost greens."

In addition to a very well maintained course, members have access to a comprehensive range of practice facilities, including a short game area, putting green, warm up nets, chipping area and a ten acre practice ground with distance markers and target greens. All these, along with the gardens, are tended by David and his team.

The club has a thriving ladies section, which oversees its own competitions on Tuesday and Thursday. The junior section has over a hundred members, supported by a Junior Trust which raises funds on its behalf, providing such benefits as free golf tuition, whilst mens competitions run throughout the year on Wednesday and Saturday. There is also a comprehensive programme for mixed golf.

For the past two years, the club has been one of the hosts of the Alan Shearer Challenge, in which the now Match of the Day pundit plays a 'round' of golf at eighteen different courses across the country in one day in aid of his foundation which, in 2013, raised over £20,000. In September 2014, he arrived by helicopter, played just one hole - which he birdied - before heading back into the skies and on to his next course.

As well as various open competitions throughout the year, this is what makes David's job so enjoyable. "There's nothing better than having your work appreciated in this way," he says. 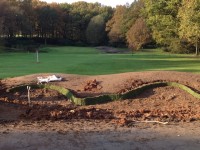 David details ongoing work to the members via newsletters, the club noticeboard and website.

Winter projects saw work begin on bunker reconstruction last year, with twelve bunkers completed on the 1st, 10th and 11th. Wayne Freeman from Lakeland is employed to do the heavy earth work, with David and the team using their JCB 801.8 mini digger to install drainage lines and complete the more intricate work around the bunkers; "my favourite piece of kit," he confirms.

Work has already begun, this winter, on the bunkers on the 2nd, 3rd, 4th, 9th, 17th and 18th. "The 17th, in particular, is a massive project. It is being totally revamped. We will be working from drawing supplied by golf course architect, Tom MacKenzie. We aim to get as much work done as the weather will allow." 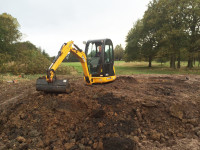 The process sees the new bunkers dug out and shaped by Lakeland, followed by drainage, adding a lining, edging the bunkers with blocks of turf, turfing the surrounds and adding sand. "Sounds simple, doesn't it?" states David, "but it has been a huge undertaking. It has required closing holes whilst the work is being carried out, so we added a timeline and images to the website so that the members could keep up to date with progress. In the main, they understand that the work will improve the course, although we did have one instance where a golfer played a shot off the new turf and then drove his buggy straight across it! No amount of chicken wire and signage can help some people!"

"We will also begin a programme of stripping, levelling and turfing tees but, with the changing weather patterns, we are finding that we are mowing much later into the year, and starting earlier the next, which impacts quite considerably on the time available."

"In fact, summer 2013 was a shocker. It was so wet through May and June that we struggled to keep the course open at times. Fortunately, the USGA greens coped well and, as you can see from the pictures, the course generally recovered well."

Where pests and diseases are concerned, David confirms that they do not suffer from specific disease outbreaks and that any spraying required is, again, carried out in house. 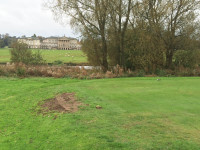 Where he does suffer is with rabbits, geese and badgers, the latter causing quite a bit of damage. "There's nothing we can do about the badgers as they are a protected species," David bemoans, "but we do control the rabbits with a combination of shooting and ferreting, and we also prick the geese eggs."

The flora and fauna on and around the course is a high priority and a large area of the park is a designated Site of Special Scientific Interest, which is carefully managed to protect wildlife. As a result, deadwood and trees remain where they fell to provide habitats for all sorts of animals, insects and fungi.

The Kedleston Park Golf Club Ecology Group was formed in December 2003 as part of the R&A's encouragement to golf clubs to become more environmentally sustainable. "Initially, we made and erected several nest boxes, designed to attract various species of birds. We also surveyed the flora and fauna to determine what we had around the course." 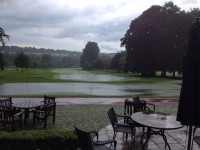 "The rough between the 5th and 6th and the 3rd and 9th holes was becoming very overgrown with self setting trees, so a working party was organised to remove these to maintain grassland. This resulted in a pair of barn owls nesting in one of the boxes and, in August 2008, four owlets were ringed by a qualified expert. Strangely, and although barn owls have been seen on several occasions since, there has been no further breeding."

"We set up feeding stations for the birds and try to keep them stocked, resulting in many interesting species being seen at them, including Great and Lesser Spotted Woodpeckers, Nuthatch and Goldfinch. A total of 116 species had been recorded in the area at the end of 2012." 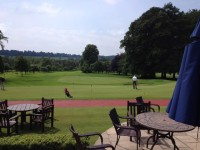 "A number of snowdrops have been transplanted from an area of the course where they could not be seen, to the spinney by the 9th green. The display is improving yearly."

"We have arranged for a programme to eradicate about five areas of Japanese Knotweed on the course, with the help of the Mackworth and Markeaton Brook Project, and with no cost to the club. That project has also funded otter holts with which we assisted."

"The Ecology Group is available to advise the club on any matter relating to the local ecology and keeps close associations with other organisations, such as Derbyshire Wildlife Trust, RSPB, National Trust and the Mackworth and Markeaton Brook Project."

He may well be a rare breed himself having worked for one club all his life. Pitchcare congratulate him on this achievement. 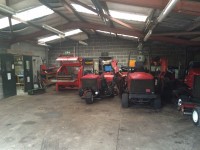 Machinery servicing is carried out in house by the team's greenkeeper/mechanic.