0 A green’s soil is its heart 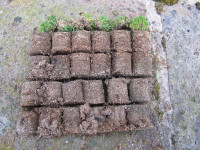 Topsoil contains the bulk of the organic components of the soil. These include a living biomass (plant tissue and microbes), detritus (dead roots and other compostable plant residues) and humus. This organic matter is predominantly a colloidal mixture of complex organic substances which can no longer be identified as grass. The upper 10 cm represents the topsoil of the green, which is directly influenced by the level of use, management and provision of nutrients. 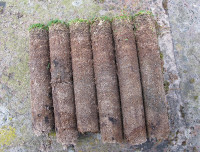 A healthy, fresh smelling soil is rich in the aerobic bacteria and enzymes that are responsible for mineralising thatch at the base of the green into useable nutrients for assimilation via the grass roots. Some are responsible for the nitrogen cycle. That is where the ammonia changes to the nitrate form.

Aerobic bacteria must be present for the occurrence of soil nitrification and breakdown of leaf and stem residues. These will be converted into organic matter and, eventually, become nutrients for the following season's grass.

The topsoil also contains other mineral particles like calcium, potassium, phosphorus, sulphur, magnesium and several trace elements. Soils that are low in organic matter are subjected to erosion in one form or another. Eroded soils typically contain about three times more nutrients than the brash left behind. So, the performance of the green really begins with the soil. 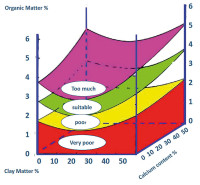 Grasses are unable to consume un-mineralised material. High levels of organic matter can reduce the availability of essential trace elements, whilst also harbouring deleterious fungi. Organic matter does not need to be a large constituent, therefore it is necessary to break down excessive organic matter, in order to reduce the development of harmful fungi and pathogens, whilst maintaining the availability of essential nutrients and trace elements.

When additional Nitrogen may be required

Something else to be considered is the Carbon-Nitrogen Ratio (C:N) of the top soil within the green.

Decomposition of organic matter is affected by the presence of carbon (C) and nitrogen (N). The C:N ratio represents the relative proportion of the two elements. For example, a material, having twenty-five times as much carbon as nitrogen is said to have a C:N ratio of 25:1.

Organisms that effect the decomposition of organic matter use carbon as a source of energy and nitrogen for building their cell structure.

Decomposition takes longer, when the initial C:N ratio is much above 30. Soil, containing organic matter with excess carbon, can create problems for the grass. 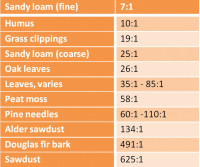 During the decomposition process, the microbial cells will draw any available soil nitrogen in the proper proportion to make use of available carbon. This is known as "robbing" the soil of nitrogen, and delays availability of nitrogen as a fertilizer for growing plants.

Plant residues are generally made up of the following:

Rate of decay and release of nutrients to the soil vary greatly. Likewise, demands of living soil microorganisms vary as they break down plant residue. Sawdust (made primarily of lignin and cellulose) will use vast amounts of nitrogen energy to maintain the lives of microorganisms digesting it.

The optimum ratio in soil organic matter is that of humus - C:N ratio of 10:1.