0 A Hat-trick for Charterhouse Redexim 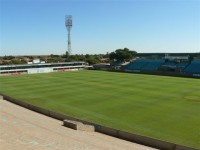 As with most other aspects of this year's World Cup, the grounds maintenance regime was slow to come to fruition. It only gathered pace at the beginning of the year when FIFA demanded that all World Cup matches be played on cool season Ryegrass.

South African sports fields usually contain warm-season grass types, such as Kikuyu, because it's inexpensive and drought tolerant and doesn't demand such careful maintenance. However, as the World Cup is being played during the South African winter the Kikuyu goes dormant, and in any case the colour of Ryegrass is aesthetically more pleasing for TV coverage. The STRI came to the rescue and their experts began briefing the 80 or so Grounds Professionals that will be taking care of the 70+ playing fields in use during the tournament.

Work began in earnest to renovate the surfaces with frase mowing to remove the top of the Kikuyu plants leaving only the roots. These roots are very important as they serve as a reinforcement of the turf and create a base for the roots of the Ryegrass to hold on to. The pitches were then aerated using a Charterhouse Redexim 'Verti-Drain' cracking the soil and thus creating ideal growing conditions for the new seed, which was sown using a Charterhouse Redexim 'SpeedSeed'. This seeder can create close on 1900 holes per m2 with random dispersal of seed to leave no drill lines.

The procedure was finished off with the surface receiving a thin layer of sand from a Charterhouse Redexim 'Rink brush spreader'. This ensured the seed was allowed the maximum soil contact for optimum germination. This is followed by very heavy irrigation, between 100,000 and 150,000 litres per field per day, so that the thirsty Ryegrass could grow and develop quickly. In fact after only 4 weeks, on April 24, the first World Cup 'test' match was played at the Kimberly GWK Stadium.