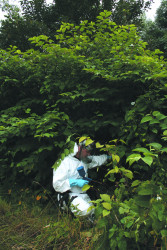 Of all the invasive plants that threaten our rural landscape, Japanese knotweed is the one feared most. But now a new stem injection treatment system is set to get to the root of the problem

To the average layman, Fallopia Japonica sounds like it might be the name of a villainous character from the latest Harry Potter but, as most greenkeepers and groundsmen know only too well, it is something altogether more frightening and dangerous.

Japanese knotweed, as it is more commonly known, is considered to be the most deadly of non-native, invasive plants now threatening Britain's rural landscape. Native, as its name suggests, to the Far East, it was widely distributed to Europe during the 19th century as an ornamental and fodder plant. It has since become such an environmental issue that anyone found spreading the plant today, however unwittingly, could face prosecution under the Wildlife and Countryside Act.

As an indication of the scale of the problem it is estimated that it costs landowners and developers some £2 billion a year to treat, with experts believing that in England and Wales at least one Japanese knotweed infestation can be found every 10 square kilometres.

Within the construction industry, for example, it is responsible for holding up major regeneration projects and adding millions to development costs and, earlier this year, a 10 acre swathe of knotweed was discovered on the site of the 2012 London Olympics which is estimated could cost over £70 million to clear. Even on a smaller scale, it is the curse of greenkeepers and groundsmen across the country, affecting huge areas of golf courses, parkland and playing fields.

The problems with Japanese knotweed are twofold. Firstly, it is a prolific grower that has the ability to reproduce itself frequently and quickly. The plant grows in dense clumps up to three metres in height and with roots that can go a further two metres beneath the surface. Secondly, once established, it is almost impossible to completely remove or eradicate.

Although it dies back each year its ability to reproduce itself by rhizomes is the reason the weed is so invasive.
That's not to say that there aren't many 'specialists' and organisations that have built successful businesses out of the treatment of these invasive plants, but there are pros and cons with almost all of the traditional treatment methods currently being employed.


All that could be set to change with the introduction of an innovative new stem injection treatment system. Developed in the United States over the past seven years where it is proven and endorsed by major herbicide manufacturers, the new equipment and treatment method is available for the first time in the UK through Cheshire-based, Stem Injection Systems (Europe) Ltd.

An alternative to traditional chemical spraying and 'dig and dump' methods, this latest technology brings a completely new approach to tackling the environmental menace of plants such as Japanese knotweed, Giant Hogweed and Himalayan Balsam. It works by delivering a measured dose of herbicide into the centre of the plant rather than just to the surface. This means the treatment is extremely localised, only ever targeting the plants injected and preventing the environmental risk of drift spray, run off or contamination of watercourses and other sensitive vegetation.

In fact, the effectiveness of injecting a herbicide directly into a plant to achieve maximum control and minimal impact to the surrounding environment is something that has been known for over a century. What has hindered the development of this method has been the ability to design a delivery system capable of facilitating this approach with any degree of consistency.

Similar methods like cutting the stem and removing the plant before pouring herbicide into the open cavity have achieved some good results, but there are obvious problems of herbicide spillage and, of course, dealing with viable plant fragments that can themselves exacerbate the problem. Knotweed only needs a tiny fragment of its underground rhizome, the size of a thumbnail, to survive and regenerate.

Other traditional methods have been just as flawed. Chemical spraying can harm other plants and wildlife in the area, is expensive and by no means 100% effective. Digging out the weed is equally expensive, must be repeated a number of times to remove any trace of roots or rhizonic growth, and must be disposed of as hazardous waste, filling valuable landfill sites with huge quantities of contaminated soil.

So, the precise control, the speed and the practicality of an injection delivered herbicide appears to be the obvious solution and the new stem injection system is finally being made available to British greenkeepers, landscapers and ground staff.

Injection directly into the plant stem using a specially developed needle means the method is unaffected by rain or wind and can be applied in all weathers throughout the growing season of April to October. Given this summer's wash-out this has already proved a major advantage, enabling treatment to carry on undeterred by the constant downpours.

The new system can treat plant clumps in minutes meaning treatment times for Japanese knotweed removal are reduced by up to five times over conventional spraying and, because the injected plant does not re-grow or return, the cost of weed removal is ultimately reduced.

The team behind this innovative introduction into the UK market are David Layland and Richard Podmore, joint managing directors of Stockport-based company, Japanese Knotweed Control, which was established a couple of years ago to provide traditional knotweed treatments and consultancy to commercial customers such as local authorities, developers and house builders. They have now launched sister company, Stem Injection Systems (Europe) to sell the new equipment.

"At that time of launching Japanese Knotweed Control we recognised a niche for timely and cost-effective solutions in the face of increased government and environmental legislation," says David. "Since then we have certainly seen a marked increase in awareness and response to this issue amongst many organisations for whom it is a serious problem with huge cost and disruption implications."

"Our intention was always to try and stay at the forefront of new treatment technologies and, when we heard about the success of this stem injection system in the United States, we immediately contacted the manufacturers to find out more," adds Richard.

After several months working with its American partners to research and trial the equipment, Stem Injection Systems (Europe) was established to roll out the product across the whole of the UK and Europe.

"It's exciting because it is so innovative and yet so simple," says Richard. "The equipment is being made directly available to organisations with in-house treatment teams such as councils or golf courses and, supported by our training, it is extremely easy to use by anyone qualified in the use of herbicides."
Meanwhile, the company continues to use the stem injection equipment as a major part of its own armoury in tackling Japanese knotweed infestations. "Our team is out in the field using this system every day, so we know just how effective it can be and the economic and environmental benefits it provides to our customers," says Richard.

It's a development that is set to cast a Potter-like spell over the future of Fallopia Japonica.