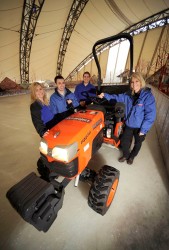 Dancing on Ice has inspired everyone to don their skates and emulate their favourite celebrity, but at one ice rink it's a Kubota tractor that proved to be the star of the show!

Staff at the Eden Project in Bodelva, Cornwall, have been using a Kubota B2230 Compact Tractor to power an Olympia 250 ice machine used to clean and prepare the ice for skate sessions.

Since Eden's popular seasonal ice rink first opened five years ago, the organisation had used a golf buggy to pull its ice machine. Unfortunately, both machines were written off during a major flood which caused the ice rink to close for one month from 17 November 2010.

After consultations between the ice rink staff and John Ryan, the transport manager at the Eden Project it was decided that a faster, more powerful and efficient replacement was needed and the Olympia 250 was chosen. After seeing it being driven by a Kubota tractor on the manufacturer's website, he approached local Kubota dealer Vincent Tractors to find the best machine for the job.

The ice machine works by removing a fine layer of ice, collected as snow, whilst simultaneously cleaning and resurfacing the ice using warm water. It weighs 70lbs empty and can hold 50 gallons of water together with 21 cubic feet of snow. With this in mind, David Marks at Vincent Tractors suggested that a B30 series tractor, with Kubota's ETVCS diesel engine and powerful hydraulic lifting system, would be best suited to power the ice machine when fully laden.

The B2230 was delivered on 10 December and was fitted with special tyres featuring special ice-studs as a precaution to ensure that it wouldn't skid. The 22hp machine features fully hydrostatic power steering, bi-speed turn and four wheel drive as standard, ensuring it can maintain good grip in even the slippiest of conditions.

It has since been used to help create an expert surface between every skate session - a feat that takes around 20 minutes on the 35m x 22m rink. As a result, Eden's ice rink was able to cater for approximately 23 skate sessions every week.

Now that the season's over, John explains that the B2230 has been a huge success: "The Kubota is extremely easy to operate and drive. It has excellent visibility and the only limitations have been caused by the manoeuvrability of the ice box, not the tractor. But once staff learnt how to back it into the corners, resurfacing the ice has been a doddle.

In fact, it's been such a hit that I have staff queuing up to be trained how to use it!"

But it's not just the staff who were impressed by the Kubota's 'skating skills', John explains that the visitors, particularly children, were absolutely amazed to see a tractor on the ice. He said: "People think a tractor would be far too heavy and would crack the ice, but it's not. As a result, we've had crowds of people staying on after their skate sessions to watch the ice being cleaned and resurfaced - it's been a great way to engage with visitors."

As well as being pleased with the tractor's performance John says he's been delighted with the service provided by both Vincent Tractors and Kubota. "We had an extremely tight timeline but they bent over backwards to ensure that we had the tractor a week before the ice rink reopened so that we had plenty of time to train our staff. I wouldn't hesitate to recommend them."

Asked what he'll be using the B2230 for now that the skating season is over and John isn't entirely sure, but one thing's for certain, he won't be getting it dirty!

He said: "The Kubota's powerful enough to pop a front loader on and use for any number of jobs around the Eden site, but like any hard working machine, it would quickly start to look tatty. I want to keep it pristine for next year's 'ice display', so will be looking for a clean job for it - perhaps pulling one of the road train carriages that transport disabled visitors and their carers from the car park to main site.