0 A lesson in being pitch perfect at Queen Ethelburga's 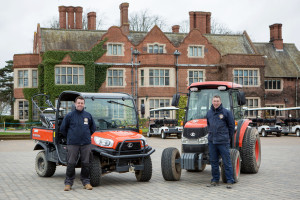 Few schools in the UK can claim to have over 22 different sports pitches located within their grounds. However, for Queen Ethelburga's Collegiate in York, their sporting facilities rival many of the country's leading premiership clubs.

Opened in 1912, the Independent boarding school's sporting curriculum is one of the most expansive in the country, with tennis, basketball, handball, hockey, rugby, football and cricket just a few of the sports on offer.

Home to 1500 students from over 66 different countries on a 200 acre campus. Continuous capital investment over the years has transformed the site, and the last 6 years has seen over £20 million dedicated solely to improving the 34 acres of outdoor training facilities alone.

Joining Queen Ethelburga's in the autumn of 2016, Grounds Manager, Ben Grigor, and his three-man team, represent the school's new grounds department and they have a determination for the sporting grounds to be some of the best in the UK. Having worked for iconic venues including the RICOH Arena, Kassam Stadium and the Ibrox Stadium, Ben relishes the challenge of maintaining such varying and high profile sporting facilities.

With £20 million invested in new pitches alone, the team's daily maintenance requires high power machinery as they have natural grass, synthetic, water-based and traditional sand-based pitches to contend with.

"Having maintained groundcare for renowned sporting events including the Commonwealth Games and the Euros in 2012, I know that the quality and condition of the Queen Ethelburga's pitches really are second to none," said Ben. "When visitors come and see the sheer expanse of the site and its condition, they can't believe that the sporting facilities belong to a school, and this is an expectation that we strive to maintain."

"When we were resourcing new groundcare machines, it was paramount that we chose vehicles that facilitated the consistent maintenance of 22 pitches, day in - day out. When I joined the Collegiate in September, they already had some older Kubota machines that had done not hundreds, but thousands of hours of work and they're still going strong. So, when it came to maintaining the new pitches, I knew that Kubota was up to the task.

"The RTVX900 is extremely useful when navigating both staff and equipment around site, especially for light towing jobs when both of the L4240 tractors are in use. With such a significant investment into both the pitches and sporting facilities, it is essential that we ensure that the machines work as economically as possible and meet the site's varying requirements."

It was Kubota's compatibility with a wide range of implements and machines across the range that made the manufacturer such a clear choice. The two G23 ride-on mowers are at the forefront of the pitches daily maintenance, providing clean and consistent cutting every day, while also being a useful tool during winter for cleaning up leaves and debris after professional and school matches. Supporting the G23's are two manual L4240 compact tractors which provide easy operation for the team when completing spraying, top dressing and aeration work.

"The Collegiate's recent investment into its facilities, staff and machinery already reflects their continued commitment to making the sporting ground one of the best in the country. Big changes are set for the year ahead and it's up to us and our machines to ensure that the pitches are kept to the highest possible standards."

For more information on Kubota and its extensive range of solutions for the groundcare sectors, or to find your local dealer, visit www.kubota.co.uk or call 01844 268000.