Resurrected from the ashes of Telford United by a supporters trust in 2004, AFC Telford United are currently set to start the 2015-16 season in the National League North 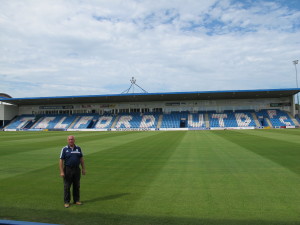 The club play their home games at New Bucks Head, a modern, inviting stadium that was opened in 2003 to replace the Bucks Head ground which had been Telford United's home for over a century.

The man responsible for the club's playing surface for the past eleven seasons is Head Groundsman Mick Conway, a former winner of the Football Conference Groundsman of the year award for the 2009-10 season, which he followed up with a respectable 3rd place the following year. Clearly Mick's credentials are well recognised.

In recent years, the unavoidable realities of pitch maintenance at a non-league level mean that the sward composition had migrated into one containing a large quantity of Annual Meadow-grass (Poa annua) which - as is this grass's nature - was proving difficult for Mick to manage to his exacting standards.

With local Championship side Wolverhampton Wanderers also using the surface for their under 21 side, Mick was keen to tackle the situation and a total renovation was required.

It is at this point that Wolves offered assistance to enable the New Bucks Head pitch to be completely reseeded once the 2014-15 season had ended.

Sports turf contractor ALS Contract Services were brought in to remove the Poa annua dominated turf with a KORO Field Top Maker 2000. The Telford based firm then went on to incorporate fresh rootzone back into the top and reseed the surface with a top quality Perennial Rye-grass seed mixture. This work has been underpinned and complemented by a tailored fertiliser programme comprising Everris products sourced from Amenity Land Solutions.

"As soon as Wolves, ALS Contract Services and Amenity Land Solutions became involved, things have gone from strength to strength" commented Mick, "right from the start of consultations, Everris fertilisers were the unanimous choice to underpin the growing-in and establishment of the new pitch."

Mick explained, "Out of necessity we have had to use cheaper fertilisers in the past, but the difference with the Everris products is clear to see. With high quality free flowing granules and rates clearly printed on the bags, I find them quick and easy to apply, which is a great bonus when you don't have many staff and time is limited."

As well as the clear benefits when applying the fertilisers, Mick feels there is also a clear step up in agronomic performance. "We applied Sierraform GT STEP Hi-Mag to rectify any trace element deficiencies, this was followed by a base feed of Sierrablen Plus Active Fertiliser 19-5-18 +2MgO + Trace Elements at 35 grams per square metre."

"We are then following that up with applications of Sportsmaster Zero Phosphate 12-0-9 every six weeks. As a result of what we have been doing, the establishment of the seed has been outstanding, way above anything expected. The new pitch was playable after 5 weeks, with sward density at 100% and root depth already at 50-75mm. The surface is unquestionably stable, holding together and playable. To turn it around in such a short space of time from the Meadow-grass sward we had only a few weeks ago, really bodes well for having a pitch everyone at the club can be proud of during the coming season. "