0 A load of Warlocks!

Burnley have been suffering a spate of cruciate knee ligament injuries. Some may view this as a coincidence or multiple strokes of bad luck, but not Kevin Carlyon, otherwise known as 'Kev the Witch', who has pinpointed the exact problem 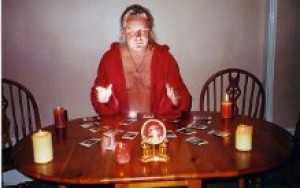 "It goes beyond any coincidence," explained the man who bills himself as 'high priest of British White Witches'. "With all the injuries being the exact same, it seems as if evil has been to work".

Kev reckons the frequent knee injuries are all down to a dastardly spell that was most likely cast upon Burnley around twenty years ago. "It will escalate and start affecting other areas of the club. Financial backing could be lost, or maybe maintenance issues could occur within the ground."

The hanging of the 'Pendle Witches' in Lancashire, only seven miles from Turf Moor, could be the origin of the curse, with Kevin explaining that Pendle Hill has become an area of "cleansing". People visit the hill regularly to make their wants come true. So we know who's to blame, then - a Blackburn fan.

Kev's incantation for Burnley went as follows; "To this circle I now add my spirit, and now, as all these elements are combined, I purify and energise a circle of power. So may it be done. I now ask the element of nature to reach out and allow me to perform this spell to both protect and reach out to the ground, now used by Burnley FC. And, as I reach out, I protect the club from any evil intent."

"I now reach out to Burnley FC to both protect and increase the luck of all players. Whoever has placed these malicious and demonic energies - may the elements of nature rebound this to the place it came from."

"On this day, I ask that luck and health comes to all that use the football ground, including members of staff, the players, and fans attending matches."

"May it be that, by Halloween, those repetitive knee injuries are stopped, and may the energies that I invoke start a run of increased luck for Burnley. May it be that a psychic wall be placed across the goalmouth of Burnley FC each time they play, and a winning streak be played upon the club so that it's fortunes return."

Following Kev's work, Burnley have not suffered a single cruciate ligament injury. They've also not played, due to the international break, but let's not let facts get in the way of spiritual matters.

Story from the Daily Telegraph