"With such a complex topography, there are a number of micro-climates we have to contend with, so a 'one fix' programme simply would not work here"

Hetzenhof Golf Club is the largest golf course in the Stuttgart region of Germany. It is overlooked by the Three Emperors; the Hohenstaufen, Rechenberg and Stuifen mountains, and is arguably one of the most magnificent settings for a golf course in Continental Europe.

It began life as a 9-hole course - Göppingen Golf Club Filstal e.V. - attached to the US Army base in Göppingen Stauferpark where German 'members of good standing' were also allowed. Cost of membership was $50. Following a change of location, the course has since grown to a 27-hole PGA championship course, consisting of three 9-holes, with an additional 6-hole short course. Development has been fast paced in recent years.

Following German reunification in 1990, American troops were withdrawn from the base which, as Head Greenkeeper, Wolfgang Mayer, explained, left the club in an 'uncertain legal position'.

"The town of Göppingen laid claim to the land, which meant that the proposed expansion to an 18-hole course had no chance of being successful, especially as plans would need to be passed by the local council."

This marked a change of location for the club to their current one in the small town of Lorch in the Rhine Gorge, and a name change to Golf Club Hetzenhof e.V. (e.V. denoting a registered association with the local authorities, and Hetzenhof a region of Lorch).

After only thirty-three months of planning and construction, the new 18-hole course was completed in June 1995 and, in 2007, following a 1.25m euro investment, was extended to a 27-hole championship course, with the 6-hole short course also being developed.

Wolfgang Mayer is a qualified agricultural machinery engineer, but has spent twenty years involved with Hetzenhof in its various guises, having accepted a permanent position in 1993. Four years later he completed his studies in golf course maintenance. 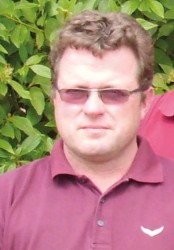 He is supported by two highly qualified greenkeepers in brothers Karl and Fritz Hieber, with Gerd Zwickl, Eberhard Hinderer, Peter Nützschke, Markus Maier and Oliver Riess offering additional support on a part-time basis. Depending on the time of year, there are between four and six staff on duty at any one time caring for approximately 140 acres.

Both Course A, Hohenstaufen, and course B, Rechenberg, begin and end on the flat Schurwald terrain. In between lies the 'valley of tears', which includes five fairways traversing significant elevation changes and steep slopes.

The third C course, called Stuifen, is the longest of the three courses and completes the 27-hole Championship course.

On such undulating terrain getting maintenance equipment onto the course is difficult, with only two access points, one close to the machinery shed and the other from the B297 main road!

"With such a difficult area to cover, only the more experienced greenkeepers are allowed to use equipment on the most undulating areas of the course," explains Wolfgang, "with the part-time helpers tending the more level areas."

Wolfgang went on to explain that, on such a complex and potentially dangerous terrain, it is important to know where team members are at any given time so, in 2001, he introduced GPS tracking from measurements taken across the whole terrain. "This gives everyone peace of mind should any accidents or incidents occur," he states.

In addition, he has programmed a database that allows employees to enter maintenance tasks they undertake. This includes fertiliser applications, mowing and any mechanical or maintenance work. This allows the course's annual requirements to be accurately mapped. 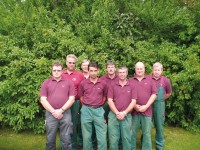 There's no drainage or irrigation on any part of the site. Marcus believes that a trained greenkeeper can see with his own eyes where any problems might occur. "With such a complex topography, there are a number of micro-climates we have to contend with," he reasons. "So, a 'one fix' programme simply would not work here. It's fair to say that, because of the climatic variations, different areas of the course require different mechanical maintenance and fertiliser applications.

On such an ecologically sensitive site, Marcus is only too aware that his working methods should be as sustainable as possible.

"Where possible, we aim not to use plant tonics and soil improvement agents, but we do have to keep the soil healthy and the grass sturdy so, on some parts of the course, we simply have to use them."

"I'm always looking at new and innovative products and, if we use any of them, then quantitative documentation will be prepared to show their impact and effectiveness. After an appropriate time, we evaluate the results to measure their precise effectiveness."

"There have been so many legislative changes recently regarding the use of pesticides, so it is clearly very important that we understand the needs of the course," says Wolfgang. "I guess there will come a time when we will no longer be able to use any chemicals, so other solutions will have to be found."

All the work is carried out in-house and the machines are serviced regularly in their own workshop. This keeps downtime to a minimum. It is only the more serious problems, that cannot be resolved without the need for specialist tools, that are outsourced.

"We carry out our own grinding and that usually results in us spotting any likely problems before they happen. My team are very professional," he states.

Wolfgang believes in purchasing quality, machinery, but that does not always mean the most expensive. "I look for value for money, customer service back-up and the availability of spare parts from my suppliers. I have no special preference for one manufacturer over the other. Ultimately, what counts for me is the quality, and that the machine will do the job it is intended for." 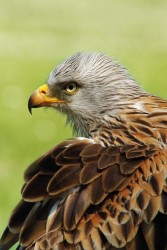 Maintenance extends through mowing, ironing, scarifying, aeration and topdressing. "With twenty-seven holes we can generally schedule our maintenance work so that we are not disturbing the golfers," he explained

"Greens are mown daily on a rotating cycle, interspersed with ironing, to 3.4-4mm. The fairways are mown two to three times a week as required."

"Aeration of the greens begins in spring. The older greens have a relatively high silt content, so these are hit with 24mm solid tines down to a soil depth of 290mm. On the newer greens, we use 12mm hollow tines to a depth of around 120-150mm, and then, at regular intervals, with 8mm solid tines to a depth of 120mm. We generally try to carry out a thorough aeration at least three times a year. Of course, there is a continuous overseeding programme."

Wolfgang says that it is no exaggeration to say that the natural surroundings, due to the variety of colours and shapes, takes visitors breath away in astonishment. "Besides the typical topography of the region, we are also blessed with orchards, small lakes and an almost unimaginable diversity of flora and fauna."

During my visit, I was fortunate to see a red kite which had alighted on one of the greens. It was, as Wolfgang agreed, a wonderful sight. This environment, with its spacious grassed areas, small patches of forest, steep slopes and soaring mountains certainly is a treat for the senses, but you have to be one good golfer to get round parts of the course. 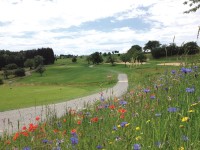 I ask Wolfgang if the club does anything to maintain and further promote wildlife. "We have sown wildflower meadows, and this has resulted in an increase in insects such as butterflies, wild bees and bumblebees. Even the rather shy stoats and weasels can be seen here and there on the golf course."

"At the end of October we had to have eight trees transplanted. These included oak, beech and maple. They were moved to accentuate the contours of the fairways and also because they had become too big in their present location. This was one of the occasions when we called in specialists to carry out the work."

Last summer, the club, along with its 1,200 members, celebrated its 25th anniversary.

Wolfgang Mayer has a unique, beautiful and unusual workplace which, for twenty years, he has lovingly tended. The club should hope that he will be around for the next twenty years in this very special corner of Germany.