0 A marriage made in Devon! 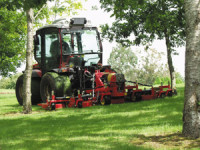 David Wood must enjoy a challenge. Having got out of dairy farming, he bought 125 acres in South Devon to build a golf course. A brave, some would say foolhardy, move considering he knew precious little about the game.

With a design from Bristol-based course architect Adrian Stiff, David and head greenkeeper Buster Lewer, (former first assistant at Wells Golf Club), set about building an 18-hole course near Torbay. Sixteen years on and Dainton Park has matured into an attractive and popular course with a thriving membership of 650 plus waiting list.

After building his golf course, the team were faced with the difficult choices over the greenkeeping machinery they needed - especially as funds were limited and David was reluctant to buy expensive machines for a new course that would take time to mature and 'bed down'.

During the early years, the fairways were cut with a set of Brouwer trailed hydraulic gangs, whilst the 40 acres of semi-rough were cut with an agricultural topper. A 45hp Kubota tractor provided the power for both jobs, plus general haulage, and kept working five and sometimes seven days a week.

A rapidly maturing course plus the' expectations of golfers for striped fairways led him to invest in a fairway mower after about seven years. The topper needed replacing sooner as it was too slow. "The expensive option was a 40hp dedicated machine that would stand idle for large parts of the year."

As a farmer David doesn't like to see expensive power units languishing in the shed. "The ideal would be one 55hp unit with quick attach i 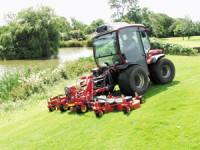 nterchangeable cylinders and decks to cut both fairways and semi-rough! At least with a tractor and mower we've got almost as much versatility, with the tractor available for other jobs,' he says.

The mower of choice has been the seven-deck Lastec Articulator and he is now into the third generation of these machines.

"We bought our first unit second-hand", says David. "It was a trailed mower and suited our terrain - the decks are smaller and flex more than most dedicated rotary mowers and therefore produce a better finish without scalping. This is important on a new course."

In 1996 a new 325 Articulator deck was bought to go on a 30hp Kubota out-front mowing unit. This gave the greenstaff a taste for the superior finish of out-front mowing with a machine that could work between the trees and over the bumps around the greens. "A mower out front is more operator friendly and, no matter how good the suction, with trailed machinery you always end up seeing the tractor tracks the following day," comments David. "The downside is that pushing rather than pulling an implement uses more power."

When the time came this summer for a new machine he checked out the 721XF Articulator coupled to a Carraro 6400 tractor unit. He thought the combination superb, but wanted a bigger cab on the tractor. "The men spend long days on board and you have to think about their working space. When 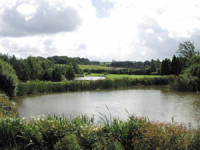 Carraro introduced its wider cab the problem was solved," he added.

"In fact the tractor was a major part of the attraction. Now I've got a 70hp tractor on balloon tyres that is compact and very stable, with a light footprint. It can be used for a wide range of tasks beyond pushing the 721 and is perfect for vertidraining/hollow-coring the greens.

"The cab is exceedingly roomy and comfortable, and it takes less than a minute to turn the seat round to face the rear for mowing. The facility to 'transfer' up to 20% of the weight of the implement onto the 3-point linkage, is another big plus. This can be used on the move to improve traction and is handy when cutting across banks," he adds.

He maintains that over the past decade Lastec has markedly improved the design and build quality of its machines. "There is no doubt this latest offering is a superbly well built unit. And because the drive is simple PTO and belts, we are able to keep it going at home. With a batwing you not only get expensive breakdowns but also stepping and other finish problems. The blades on the new out-front 721XF are only 21ins, and you've got seven decks delivering a high definition cut." David is not looking to stripe the semi-rough as he prefers a plain 'canvas' to show-off the cross-cut fairways. 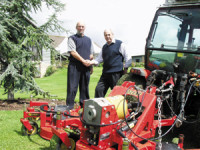 Keith Elliment, Lastec UK's head of European sales, is the man who persuaded the US parent company to develop the range of out-front machines. "The whole of the continental European market is driven by this configuration", he says. "I got the boss's ear and told him we simply had to have an out-front version, starting with the flagship unit, the 721. Now we have five and six deck machines as well, and things have taken off in Europe. The 721, with its 6ft transport width and rear discharge (mulching is also available) is a real winner."

Meanwhile, says David, the semi-rough continues to benefit from the attentions of the Articulator. "When we tested the 721XF, the difference after just two weeks of use was very apparent. The grass was sitting up, almost as if it had been cylinder mowed. It gives a great finish because it gets into all the hollows, and with an 11ft cut you really cover the ground and don't need so many pieces of kit. The Articulator and the Carraro are a marriage made in heaven."