0 A marriage made in Fleetwood!

A Campey demo day is almost a thing of beauty (presenters excluded), as the latest machines from the company's portfolio are put through their paces in an almost choreographed manner.

So, when Ian Campbell, the company's Product Specialist, put in a call to Dale Frith, Head Groundsman at Fleetwood Town FC, asking if he would be interested in hosting one of their demo days, he jumped at the chance, on the understanding that the company would undertake his pitch renovations.

And so it was that, on a Wednesday afternoon in late May, the Campey team - along with contractors from the north-west who had brought their existing Koro, Dakota and Imants equipment - began work on the pitch in preparation for the following day.

The plan was to get a good proportion of the work started on Wednesday, leaving enough time to put the machines through their paces on Thursday - in front of over one hundred turfcare professionals who turned up on the day - and complete the work on Friday.

Our renovations this year needed to focus on improving the drainage because, like many clubs with piped and slit drained pitches, we have suffered," explained Dale.

"Through much of the winter, the water was perched and not able to get away. The cause of this was that the existing secondary drainage was not intense enough, coupled with the amount of rainfall we had. To hopefully solve these issues, we have now installed Koro Topdrain slits."

"The work consisted of 'Terraplaning' off the existing surface, topdressing with 150 tonnes of sand and installing the Topdrain slits to a depth of 200mm, ensuring an adequate connection to the lateral drains."

"We then tickled the new sand into the top of the existing surface before levelling with Koro Speed Harrows. Everris Sierrablen Plus Renovator 20:20:8 was applied, before seeding using a Raycam Aeroseeder and Vredo Super Compact. We seeded with Barenbrug Bar 7 RPR." Contractor Carl Pass of Premier Pitches is the first to acknowledge the benefits of the Terraplanes having trialed these new machines for the past two years. "We have worked with the machine for the past two seasons and the results have been outstanding. Surface levels are improved with no tine corrugation present; hygiene is paramount when fraise mowing, and the machine offers excellent surface cleanliness as it removes the remaining sward. I think we'll see more groundsmen and contractors using this machine in the future rather than simply fraise mowing."

As well as the Terraplane, other machines being put to work included the Koro Recycling Dresser, New Holland T4 PowerStar and T5 tractors, Dakota Turf Tenders, Koro Topdrain, Vredo Seeders and a range of other ancillary equipment, such as aerators and sprayers. 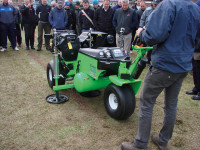 One piece of equipment that delegates were keen to see was the latest addition to the Campey portfolio from America, the Air2G2 compressed air aerator.

Air is injected into the area below the compaction layer and forced to move up through the soil to the rootzone. Not only is compaction released in the critical rootzone area, the aerator is also able to fracture the soil and create airflow from the bottom up, thereby increasing porosity.

During the demonstrations, Richard Campey and Simon Gumbrill described, in detail - and in their own inimitable styles - the benefits of each machine.

During the course of the day, all the key renovation techniques were explained and demonstrated to the assembled delegates, who came from all manner of sports and leisure facilities, including several local authorities, contractors, agronomists, greenkeepers and groundsmen.

With the heavy renovation work completed, Dale was left to finish off. "Ten days after seeding, the first application of Growing Solutions products was applied. A mixture of half rates of Consolidate, Bio Carb and Foliar K, along with some Como, Foliar Phosphate and Zinc. These products are being applied to speed up the establishment process. Half rates will be applied for four weeks before adopting a full rate programme every three weeks throughout the season."

"Mowing is expected to commence approximately three weeks from seeding," he concluded.