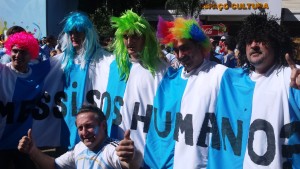 Brazil has long been a melting pot of different cultures and people and with the World Cup this has been amplified. It's typical to see Brazilians alongside Japanese alongside British and Chilean etc fans, often wearing their nation's football shirt and sometimes dressed in a costume related to their country.

There are still many England fans here in Brazil. Lee, from Southampton, was wandering around wearing an England shirt, lager in hand and with a Brazil flag tied around his waist.

"I've stayed on longer than I planned. I went to see England play Uruguay and hope to see another one but haven't got a ticket yet. Sao Paulo is more expensive than I thought but other places were cheaper."

"There hasn't been much trouble from what I've seen. I heard about a couple of things reported. It's the World Cup and is like a bubble for a while," he said. 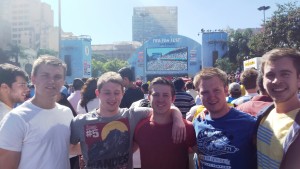 Five dental students from Glasgow were travelling South America for eight weeks and had come to Brazil to experience the World Cup atmosphere. They hadn't been to any games because of the expensive last-minute ticket prices, but were enjoying going to the fan fests and out to bars afterwards.

"Rio has been the best place we've been to so far. The people were amazing and so were the parties after games," said Andrew, one of the students. "For us it's been either spend our money going to one game or enjoy travelling Brazil and seeing the places," he added.

In Brazil options for those looking for drinks are vast, from the cheapest beers sold out of coolers on the streets, to the most expensive upmarket cocktail bars. Of course many visiting fans look to socialise between games and there are seemingly limitless options for this. 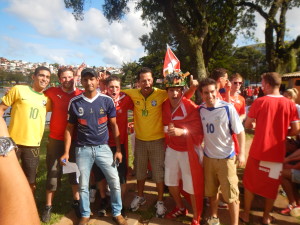 Every hosting city in Brazil has an area where we gringos accumulate. In Salvador it's near the beach and in Sao Paulo most foreign visitors are drawn to an area called Vila Madalena after and between matches. Here there are many hostels, restaurants and bars and during big games parts of it are closed off to traffic creating a street party feel.

The food and beer is pretty expensive around here though and it is possible to walk 15 minutes out of this area and find much better prices.

As you'd expect the South American teams are well represented in Brazil. There seem to be legions of Argentineans especially; perhaps sensing this is their World Cup for the taking.

There is an intense footballing rivalry between Argentina and Brazil which stems back to the late 70s when Maradona arrived on the scene. Argentineans claimed he had overthrown king Pele as the very best and Brazilians felt Maradona was a mere jester tugging on the robes of their hero. 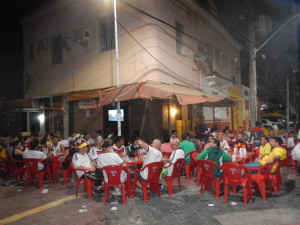 At the Argentina v Switzerland fan fest in Sao Paulo, an almighty jeer went up went up from the Argentinean fans as the camera panned to a shot of Pele sitting in the stands watching the game. It was even suggested by an irate fan next to me that he had gone to the game to act as a bad luck talisman to the Argentinean team. A 'cold foot' as Brazilians call it.

A further demonstration of this rivalry is a Brazilian TV advert running at the moment which depicts the Argentinean football team being lured into a rocket where they are then shot up into space.

Anyway, it's all banter. Spirits are high here amongst fans; everyone seems to be getting along and long may that continue. 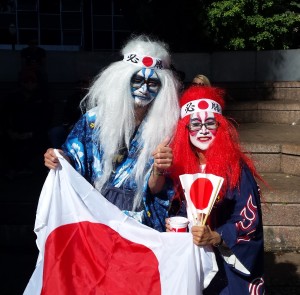