At 'The Stoop' my responsibilities are to maintain the main pitch and training area, the landscaped and the car parking areas within the fourteen-acre site. The pitch I have inherited is excellent, good grass coverage, open aspect, but the wind can be a problem when fertilising.

When I arrived in April my first task was to divot and repair the pitch, as we were still in-season. There were a few bare areas that needed to be top dressed and re-seeded such as line out areas. A "divot mix" was made up and the divots were top dressed and repaired. After ten days the seed had germinated. 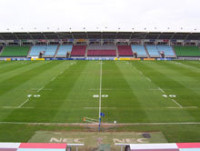 April, my home town team. I had less than three weeks to prepare for this fixture with two under 21 fixtures and two team runs before hand.

At the time the pitch needed a fertiliser dressing so I applied sixteen (25kg) bags of 14:0:7 +2%Fe +2%Mg, ten days before the fixture, this helped to produce a good green colour and thicker sward. I put the cosmetic patterns in next, six metre wide blocks on the length and five metre blocks on the width. I prefer the block pattern as it helps to make maintenance work simple and easy to do. 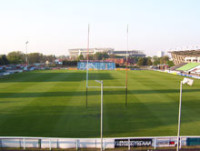 I have a John Deere triple mower to cut the pitch, but I much prefer a pedestrian mower. I borrowed two Dennis mowers with verti-cutting and cylinder cartridges and using the cartridges I was able to tidy up the grass surface and really bring up the pattern in the pitch. I am hoping to purchase a Dennis in the future.

I also lowered the height of the grass as I had noticed the grass that was cut at a lower height on the pitch line markings was thicker and tighter in appearance compared to the longer grass.

I have been getting familiar with the pitch where the water lies and is slow to drain and also the areas where the water drains too well. I did find that the existing irrigation was not reaching some areas of the pitch, certain areas were being missed and this was due to the inconsistent pressure flow to the mobile centre sprinklers. The pipe work and connectors

I called Osprey Irrigation, who came in and fitted new and compatible connectors and hoses. Now I have piece of mind and the whole pitch is watered evenly.

Now that the renovations have been completed it is time to tidy up, there is strimming, total weed killing, light pruning of the trees and shrubs and rubbish clearing around the site. There is a lot to do just tidying up the site and this will take a month or so to complete.

Its good to be back into work again and now I have the summer to put my mark on the pitch at The Stoop, so when it comes to the beginning of the new rugby season in September it will be Chris Parry's pitch.