0 A new challenge for David Withers 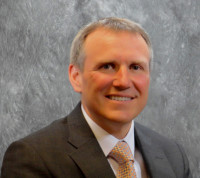 This is David Withers' nineteenth year working for Jacobsen within the Textron group. Having spent his early industry years as a demonstrator at Charterhouse Turf Machinery in Surrey, David started selling Jacobsen machinery in 1992 and, by 1997, had moved north to Kettering, where Jacobsen were based. However, it was only a few months after moving that Textron bought Ransomes and he moved to Ipswich to take on the new role of UK Sales Manager. That was in 1998 and, after then taking on the International Sales role, David was appointed the Managing Director for the UK, in 2004.

This year [2011], David has become the President of Jacobsen, based at the Jacobsen Head Quarters in Charlotte, North Carolina USA, supplemented with visits to Ipswich once a month. This is an achievement that shouldn't be lost in passing; it is recognition for the hard work and dedication that David has shown forging the business, not just within the UK, but throughout Europe and beyond.

When Ransomes was purchased by the global giant Textron in 1998, and merged with Jacobsen, the company became branded with the Textron badge. It was a decision that wasn't favourably received, and all the more surprising considering the wide range of iconic brands already incorporated into the group, such as Bell Helicopters, Cessna Aircraft, Cushman, Ryan, EZGO and Brouwer, to name a few.

When the Textron badge was dropped and the Ransomes Jacobsen brand emerged, sales improved virtually overnight. From that point, David looked to harmonise dealers and the factories, and there was increased focus on engineering and factory production. More recently, despite the recession, there has been acceleration in growth, much of this due to the increased number of technical reps out on the road. A strategy that was put in place in 2009. Whilst there is a slow down in municipal business this year, golf business is on the increase. David isn't unduly worried over the drop in municipal business, as past history shows this as cyclic, and he strongly believes that it will increase as the country finds its feet again.

One of the more quirky changes at the site was the construction of a football pitch and a three hole golf course, designed by Howard Swan. The surfaces have been invaluable for testing and demonstrating new machinery to staff, dealers and customers, whilst offering an excellent backdrop for product photography. The football pitch regularly hosts staff 7-a-side matches.

So, a new chapter starts for David, where he has to find a balance between two homes either side of the pond. While he aims to be in the UK once a month, he is reliant on an excellent team around him on both sides of the Atlantic. However, he says that he will continue to keep business simple, using the three B's. Build relationships, build a great machine and back it up for the rest of its life.

There are, of course, plans ahead, no new President would have it any other way as David suggests. "We are looking at better ways to deliver to our customers, as this can always be improved. Maybe that will mean more sales people and more in-house technicians."

"The Americas do present geographical issues and, with that in mind, we are expanding in South America. There is an increase in golf in China and South America, and we are expanding our market in Eastern Europe. Europe has reached a peak, but the replacement market has grown and is a very important part of the business too."

Jacobsen will continue to invest in their Research and Development, building specific products for different market places.

Whilst there are subtle differences between the USA and Europe, David hopes to bring more uniformity to run the business as one. He hopes this will lead to reduced costs in production and management that will release more money for promotion and marketing activity.

Away from the core business, David also reflected; "There has to be changes for the future for groundsmen and greenkeepers; their work is often not valued by their owners. They are seen as the Cinderella part of the business instead of being centre stage. There certainly needs to be more emphasis put on their role. Ransomes Jacobsen has, for a long time, invested in the future. To date, 119 greenkeepers have been funded through higher level education, and the company has built great relationship with colleges, as well as providing support for organisations such as BIGGA, FEGGA, IOG and IGCEMA and many more in recent years."

"This is a great industry, a relationship industry, where you can get on well with your own guys as well as the competition. Anyone who stays for more than five years is likely to become a lifer. That speaks volumes about our industry."