A New Man at the Rec 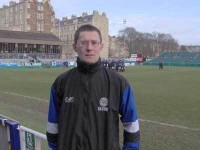 Darren Ball has taken on the job of looking after the Recreation Ground in Bath, the home of Bath Rugby Club. He took up the post of Head Groundsman in June last year. He is no stranger to sports turf maintenance, having spent the last 16 years since leaving school working for Bath and Northeast Somerset Council at various parks, golf and sports grounds where he gained experience and qualifications in sports turf management.

His position is rather unusual in that he is employed full time to oversee and maintain both the home ground and training ground of the club, but works for the council. This is because the Recreation Ground and the training ground are both owned by the council but are leased out to Bath Rugby Club.

Darren enjoys the challenge of providing a quality playing surface at the Recreation Ground, particularly with the constraints he has to face. 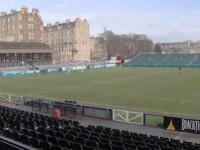 As soon has the rugby season finishes in May, after some of the stands have been taken down, a programme of renovations usually take place. Generally the rugby pitch area is vertidrained and top dressed with 100 tonnes of sand, over seeded and fertilised. This work, however, can often be delayed or affected by other events that are held on the Recreation Ground during the summer.

Already this year a major cricket competition has been planned, together with a music festival which inevitably results in the positioning of stands, cars etc. on the rugby pitch area. 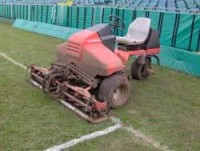 The lease agreement with the Council ensures that Darren's role is entirely dedicated to the needs of the rugby club in providing a pitch maintenance service at both the club and training grounds.

The Landbridge training ground is situated a couple of miles out of Bath and comprises two senior size rugby pitches and a small training area. Both grounds are extensively used for matches and training.

Keeping the pitches in a good condition during the winter months is quite a challenge for Darren especially as there is no drainage on either of them. There has been talk in the past of installing some drainage but nothing has happened to date. This has been due mainly to political constraints caused by the council not being able to decide on the future of the training ground facility. 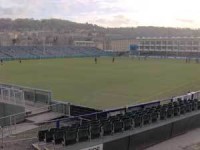 Equipment is provided by both the club and the council. The council supplies a compact tractor and all the consumable materials for the grounds (seed, fertlisers, etc.) with the club providing a ride on Jacobsen triple mower and a Turf Groundsman tractor-mounted aerating machine.

Darren is well aware of the constraints regarding machinery he has available, but will be addressing the issue once he has settled in and seen for himself what he may require to make the job easier and more efficient. However, he does not see this as too much of a problem as the council do have a number of machines he may be able to hire or utilise in the future.

His No1 priority is to ensure the Recreation Ground is playable and providing a good playing surface for the players. Bath's coach, John Connolly, is Australian and is used to dry, fast playing surfaces, so Darren's aim is to try and produce these conditions for him.

The sward height is maintained at 30mm throughout the season, cutting at least three times a week during the summer to late autumn periods. The frequency of cutting reduces as the grass growth slows down during the winter months. The triple is used in a rolling capacity to restore levels after games. 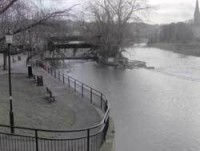 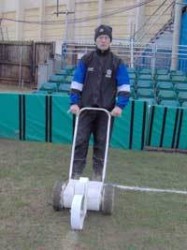 He likes to get the pitch ready early, ensuring he has only the marking out to do on Fridays. Stringing out and marking with a wheel to wheel transfer line marker usually takes about two and half hours and, since the players do not finish training on the pitch until 12.00 am, by the time he has finished the light is often beginning to fade.

Darren understands that the final presentation of the pitch is very important, not only for the players but also for the spectators. Over 6,000 fans regularly attend the Rec to see Bath play.

He is confident that the pitches will continue to improve if everybody involved within the club and council continue to work together and recognise the needs of the groundsman and, where possible, secure the necessary funding and resources required.