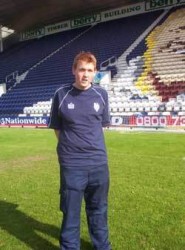 My last league game was on the 9th May but I was unable to start my end of season renovation until 17th May because we had well over 25 additional matches on the pitch catering for local and county final matches. It was a very busy end to the season.

Our Deepdale stadium is fairly open. With no corners filled and the pavilion stand still not developed, it allows sufficient light and air in. We do, however, get some problems of shade from the south stand in the winter when the sun is low, casting long shadows along the pitch right up to the north end's penalty spot. This area is in constant shade for most of the day and can often be a problem in the winter when we have frosts. The temperature in the stadium can be 2-3 degrees lower than outside, resulting in the frost remaining in the turf for longer periods.

This year our end of season renovation will see some extensive works being completed. The current pitch has a 100mm reinforced Loksand crinkled fibre (90/10 sand soil) rootzone overlaying 300mm depth of coarse sand material covering a limestone base that was put down onto the drainage system of the pitch. The limestone base and drainage system originate from the artificial pitch construction that was laid at Deepdale in the 1980's.

The reinforced system has been at Deepdale for 4 seasons now and works very well, and has contributed greatly to reducing the amount of divots and repair works required after games. However, these systems require extensive renovation works each year to redistribute the fibres and remove any build up of organic matter in the surface profile.

Leaving OM to build up on the pitch results in a series of problems especially in the winter period. The pitch is likely to become waterlogged at the surface where the OM acts as a sponge holding water in the surface profile. This layer of OM also prevents or slows down water movement through the soil profile.

Another reason we have chosen to complete this major renovation works is because we will be hoping to hold a number of high profile games next year. We are expecting to be hosting the England women's international matches, and we want to ensure we have a quality playing surface for these games.

This year we have contracted out the work to Premier Pitches who are working to specifications developed by our consultants PSD. They helped us put together the tender documents and specifications for the end of season works. We work very closely with PSD who provide and monitor the pitch's performance throughout the year.

The gallery of photographs 1-10 follow the sequence of the pitch renovation at Deepdale from fraise mowing to overseeding.

All the renovation works were completed by the 24th May and, with the recent decent warm weather, we have seen the grass germinate after seven days, giving me plenty of confidence that I will be able to ensure the pitch will be ready for its first game on July 24th, a mere 7 weeks away. 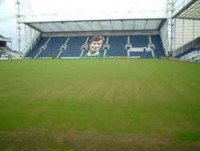 Maintenance of the pitch is designed around keeping the reinforced system open, preventing it from locking up and becoming consolidated. This is achieved by regular aeration works being carried out every month or after three games. We aerate using our own aerator penetrating down to a depth of 100mm.

Having a 90% sand rootzone means that I have to have a steady regular feeding programme. We are currently using Rigby Taylor's 12-0-9 mini granular fertiliser applying every 15 days through the summer to maintain vigour and colour. In the winter we will change to a 6-0-12, feeding every three weeks. The main reason for this high fertiliser input is the fact that we are dealing with a sand based pitch where nutrients are being used up fast by the plant or being leached quickly through the sand profile due to the poor cation exchange capacity. Applications of magnesium and iron are also applied during the season to help balance the plants' needs, and is usually applied based on the results of the soil analysis tests which are taken during the season.

Sward height is maintained at 21mm throughout the summer, 23mm during the beginning of the season (August-November) and 25mm in the winter months. We use a variety of mowers for maintaining and preparing the pitch for matches. I use a Toro Triple mower during the summer months to reduce the time it takes to cut the pitch, I use a Dennis G860 that has interchangeable cassettes for grooming, verticutting during summer, and mowing later on in the season. We also have a heavier Ransomes Mastiff which is also used and helps restore levels whilst mowing.

I manage to keep the pitch weed free by hand weeding, reducing the need to use chemicals. I do not get many turf diseases, I rarely get any red thread or fusarium but do have a few outbreaks of leaf spot which starts to show in June with further outbreaks appearing July and September. It seems to coincide with when we apply our fertiliser applications. I usually control leaf spot with an application of fungicide, usually Rovral Green applied at recommended rates.

My weekly activities leading up to matches are usually consistent, but may change dependent on the weather and future weather forecasts. The work begins immediately after the game when we spend an hour repairing divots and scars in the playing surface. We do not get deep divots with the new reinforced rootzone but tend to get shallow scars and divots.

This work will continue on Sunday for a couple of hours until all the divots are replaced. We use very little topdressing, only to repair the divots. We do not need to restore levels as we achieve this when we apply new dressings at the end of the season during the renovation works.

We seem to get more divot damage when players wear bladed boots compared to studded boots. The blades seem to act as knife-edges, having a cutting action slicing into the turf and scooping out pieces.

On the Monday we will lightly scarify the pitch (at height of cut) to clean out any debris followed by mowing to clean up the pitch. We usually take off

The pitch lines are marked out using a 100mm width wheel to wheel line marker using stretched strings, and generally takes about 2 hours to complete.

On the day of the match we start to prepare the pitch at 8.30am enabling us enough time to cut the pitch if required and overmark the lines. At 11.00am we start irrigating the pitch ready for the match. Craig Brown, our manager, and the players like to have the pitch watered before games to give the pitch a bit of speed. It will take two hours to complete the watering, finishing about 1.00pm, ready for the referee's pitch inspection.

Both sets of teams will then begin their warm ups. Modern game warm ups generally consist of a lot of shuttle running exercises which tend to be concentrated in small areas and, often depending on the weather, will wear and mark the playing surface. It is now a problem all groundsmen face. We have to learn to live with it and make the best of the situation. And, as for the goalkeepers marking a centre line, I would rather we be allowed to mark a white mark instead of the players scarring the turf. Maybe the FA will look into this and permit the use of a mark for this?

I have just completed my HND in sports turf management at Myerscough College which followed on from NVQ levels 1,2 and 3 qualifications. I believe it is important to obtain industry qualifications to help understand better the practical working experiences we carry out on a daily basis.

I have an assistant, Dean Ash, who has been with me for two years and who has gained NVQ levels 1and 2, and working toward obtaining further qualifications. Peter McCallion the former head groundsman continues to work with us on a part time basis. Also, at present we have James Riding on work experience who is currently studying his NVQ level 2 qualifications also at Myerscough. We are a very young team but we pride ourselves on producing a quality playing surface for our players here at Deepdale.