0 A partnership of interests

"Hosting the world's leading golf tournament is some achievement for us, especially given that we were recently voted the number one undiscovered golf resort in the world"

When you are a five-star international resort with three golf courses, and about to host to the world's most prestigious golf tournament, reliability is a given from service providers. 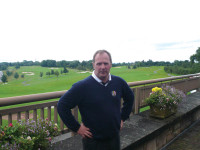 Building strong, enduring relationships with suppliers to ensure delivery of a consistently high standard of service is no easy matter, but Jim McKenzie, Director of Golf Courses and Estate Management at The Celtic Manor Resort, certainly seems to have the knack.

In his sixteen years in charge of the undulating 1,400-acre site which embraces the River Usk, Jim has witnessed seismic shifts in both turfcare and in golf. During that time, many aspects of his job have changed or evolved, yet Jim has made sure some elements remain constant, namely the standard of his work and the quality and sustainability of the relationships that he has developed with his suppliers.

"It's vital for me to work not only with specialist contractors but also with ones we know we can trust," he says. "For Celtic Manor Resort, that means using local labour, something we pride ourselves on."

As hosts of the 2010 Ryder Cup, this is a critical period in Jim's career because he knows that the eyes of the world will fall on Celtic Manor from 1st to 3rd October and he must lay trust in his contractors and suppliers to deliver to exacting standards - no small task as the tournament is the third most watched sporting event after the Super Bowl and the football World Cup.

It was back in 2001 that the Resort landed the plumb role of hosting the tournament so, in a sense, Jim has been building to this pinnacle for virtually a decade.

"The nature of my job means that any contracted work usually has to be fitted around the golf, which requires a certain flexibility you only really get with companies you have a history of and ones that are local to you," he continues.

"If we need an emergency job doing we know the contractors we use will be willing to help out at the last minute."

Stretching back over the years, Jim has become close with some key suppliers serving the turfcare sector. Arguably, one of his most productive though has been with the contractor that tackles one of the industry's persistently perennial bugbears - weeds.

It's fifteen years since Jim first began working with Complete Weed Control (CWC) and, it's fair to say, the relationship has flourished. The company, which runs a 50-strong UK franchisee network, has worked continuously at Celtic Manor since 1994.

"I first met Jim on the second hole of the Wentwood Hills course," explains the company's technical director Alan Abel. "he told me he wanted some rough spraying, so I did it there and then. I think he appreciated the fast response."

Since then, the contractor has progressed from treating a few hectares of rough to undertaking the majority of the Resort's spraying needs. Sourcing a sound contractor who you can build a rapport with can mean shedding the sometimes convoluted process of going out to tender. This is certainly Jim's sentiment. 'Stick with who you know' are his watchwords. 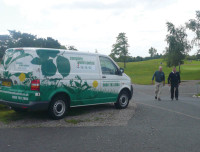 Celtic Manor's weed control requirements are all-year-round and diverse. However, Jim chooses to bring CWC in on an ad-hoc basis rather than committing himself to contractual obligations. Annual mechanical removal of weeds from the vast golfing estate is the only 'permanent' task they perform.

"The rest of the time, it's a case of ringing if we need work doing and Alan comes in with his team," says Jim. "There has never needed to be any formal contracts between us because the work speaks for itself. We have built up a solid relationship and the company is based close enough to come in at short notice."

Commitment to helping sustain the local economy is a cornerstone of Celtic Manor's operational policy, and it is one that Jim is passionate about. That stance has saved Jim and his team a good deal of time and trouble thanks, in part, to Alan's regional network of contacts, which has allowed him to put Jim in touch with other specialist contractors, such as aquatic weed control company, Aquaclear, and manufacturer of fertilisers, Headland Amenity, who also now enjoy a successful working relationship with him.

Relationships with suppliers can go deeper than purely the commitment to deliver a product or service. CWC and Headland Amenity both support Celtic Manor's signature annual event, the Wales Open, as well as the 2010 Ryder Cup.

"Hosting the world's leading golf tournament is some achievement for us," says Jim, "especially given that we were recently voted the number one undiscovered golf resort in the world, so it's important for us to work alongside contractors that also support us and the Welsh economy." 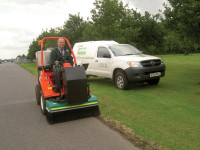 Strong relationships are essential in an industry where the pace of change is rapid. In weed control, pesticides regulations and directives, a greater focus on environmental sustainability in both public and private sectors and mounting public awareness has catapulted the sector into the spotlight. Shifting priorities for sports, leisure and amenity sites have led to a flurry of interest in 'greener' chemicals and on limiting the quantities applied or sprayed on to turf.

Perhaps, like other service sectors, weed control has certainly grown into a more involved process over the McKenzie years. Now, new sprayer technology is enabling contractors to apply far less pesticide than previously, while contractors are now introducing 'weed integration management programmes' in a bid to deliver a more holistic solution to what is a perennial problem.

In typical straight-talking fashion, Jim strongly believes that, tackling what has become so sensitive an aspect of turfcare, requires knowledgeable contractors, adept at guiding end users on weed control practices.

"I need to have absolute confidence in their ability," he states, "but the key word is responsibility. Shoddy practice simply will not be tolerated anymore. Weed control has definitely changed for the better. The chemicals we use are environmentally sound, which gives us a better standing to argue our corner for continued use of chemicals on the course," he adds. "Golf is growing more environmentally sound all the time, with courses such as ours being seen as good custodians of green issues, instead of inflicting damaging on the environment."

Keeping track of pesticide use can be difficult at the best of times but the task of achieving this across three separate championship courses would prove a tough challenge, Jim concedes - one he is happy to leave to professionals.

"It not only makes practical sense but also financial, health and safety and environmental sense to turn to a contractor for such a delicate and sensitive aspect of the job."

Spraying is all about being "pre-emptive rather than reactive", Jim stresses. Gearing up for the Ryder Cup will mean maintaining a weed-free estate - a nigh on 'mission impossible', Jim knows. He and his team are working closely with CWC to decide on short-term focus areas for treatment, as well as those to be addressed once the tournament is over.

"Naturally there will be areas that can't be maintained as frequently as others," Alan explains. "The main problem at Celtic Manor is giant hogweed growth by the river, and build-up of thistles and nettles in low-spray areas."

But, moss is a big headache, and it is flourishing for several reasons. Annual rainfall nudging 53 inches, one of the wettest periods on record, and humid weather combine to create ideal conditions for it to flourish.

The traditional treatment - dichlorophen - was taken off the market eighteen months ago under new pesticides regulations so control is difficult, Alan concedes. "We have relied on iron since the revocation," he says, "although a new pesticide for moss control, Jewel, has just been launched to give us more ammunition in our armoury."

Weed control in semi rough and rough is a continuing task, says Alan. "Nettles, docks, thistles and brambles can proliferate in these areas, if not controlled, and we apply a variety of herbicides, such as triclopyr or picloram, to get on top of them."

The efficacy of these chemicals means we only needs to apply them sparingly, stresses Alan. "We then use three-way mixes such as dicamba, CMPP and MCPA on the fairways, for example, and only when necessary. We may only need to spray every year or even biennially, depending on the weed population," he adds.

Several holes of the TwentyTen course bound the River Usk, and its banks are a breeding ground for giant hogweed. "It's an extreme irritant if its stems or leaves touch the skin," Alan explains, "so we knapsack spray with a biactive formulation of glyphosate to control it successfully. Where you have galleries of spectators, you do not want giant hogweed nearby."

The very definition of a weed, applied to fine turf at least, can often be tricky as the issue is that of "percentages", explains Jim. "We are happy to encourage ryegrass, whereas many clubs go to huge lengths to eradicate it, with varying results.

"Grasses are only a problem in relation to other species on the green. A small percentage of a different species can be problematic, whereas a 50:50 percentage is less of one. We have predominantly highland meadow grass here and are able to create a better putting surface. It is a species that allows us to apply very little fungicide."

Worms, another persistent problem, are controlled with an annual application of carbendazim. "Every worm cast is an opportunity for a weed to germinate so, by controlling the worms, you're killing two birds with one stone, to mix the metaphor."

A major change over the years has been the degree of ground upheaval to the estate. "So much construction work has gone on throughout the three courses, with so much earth movement, that this brings populations of weeds to the surface, creating a need to apply pesticides," he says.

"Weed control is becoming far more responsible and there are increasingly fewer pesticides at our disposal. Until we can do our own research into an alternative, we will just have to manage it as best we can," he confesses.

A major innovation over recent years has been the introduction of new technology to apply pesticides more accurately as part of a continuing drive to apply less quantities and so conform with the EU sustainable use directive.

"Technology keeps marching on as the management of weeds continues to grow in sophistication, but it's certainly a job that keeps you busy throughout the year in one way or another," Alan concludes.