by Charmian Robinson
in Industry News
on 06 May 2008 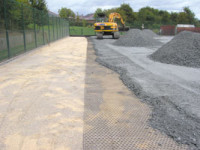 Tensar times as community project hits a problem. Charmian Robinson reports on how Cleveland Land Services were able to resolve the situation using a 'super grid'.

The Pioneer Centre in the North East village of Chopwell is an example of how Government funds can be used effectively to enhance the sporting facilities for small local communities. The Coalfields Regeneration Trust (CRT) was approached by the Pioneer Centre to provide additional funding to enhance existing facilities by redeveloping a redundant all weather pitch located on the Chopwell Primary School site.

The project's aim was to provide a floodlit Multi-use Games Area (MUGA) for hire by the local community. New fencing would separate the MUGA from the school grounds and a new footpath would also be installed.

Although, on the face of it, not a particularly large or demanding project it required the skill and expertise of an experienced contractor to find the solution to what could have been a very expensive problem. 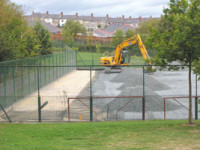 ng court within restrictive fenced boundaries. Partition fencing was to be erected between both areas with the fence centrally fixed between posts. In addition, four floodlights fitted with downlighters (Sport England's recommended standard) would be installed to light the courts for extended night time use.

When the initial resurfacing work began it very quickly became apparent that previous expert site evaluators had failed to identify that the sub-base under the original court surface was clean or 'golden' gravel - ideal for cycle proficiency testing, but not much use when applying and compacting a new sub-base for multi-sports. The only immediate option would be to start from scratch with the total excavation of all the material.

This would prove expensive and an unforeseen drain on the limited fund resources available.

It is knowledge, experience, and the ability to apply what you know to unlikely scenarios, that determine the quality of the contractor. Keith Morrison, Contract Manager for CLS, put forward an alternative solution which would allow the original clean gravel to remain in place whilst, at the same time, stabilise it to receive the new sub-base prior to the top layer of paving.

"Although not having come across this exact situation before," explained Keith, "I have had vast experience of using many different types of materials and their applications. I suggested that, by first laying a 'super grid' tensar material, then applying the new sub-base on top of the tensar, it could be sufficiently compacted to allow the paving equipment and tarmac wagons access to the court, thereby saving time and money." 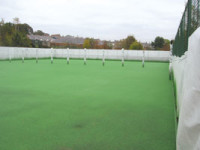 Tensar grids provide a reliable, cost effective, method for increasing the stability of weak soils and are often employed to provide stability for retaining walls, slopes, streets and car parks. "By using the tensar grid you create a stiffened, reinforced, prism capable of supporting critical engineered structures. In this instance we applied the principle of the grid to permit heavy construction on a site with an unstable sub-base."

It worked. The tensar grids were installed and proved to be 100%successful. Once the whole area had been paved the fencers could cut through the tarmac to position the fence posts. On completion the final 20mm deep rubber polymeric surface could be laid and finished off with a sprayed-on green polymeric paint.

Chopwell Village now has a fully operational multi-use sports area for use by residents and the surrounding neighbourhood. Revenue raised by the Pioneer Centre will be used to provide equipment, fund future development and, above all, promote the value of sport within a community.