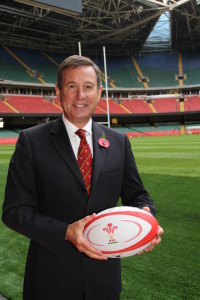 The new hybrid pitch at the Millennium Stadium will transform the playing surface and enhance the worldwide reputation of the home of Welsh rugby, the WRU Group Chief Executive, Roger Lewis, said yesterday.

The WRU officially unveiled the new surface in time for Wales to take on Australia in the first of the Dove Men Series autumn international matches this Saturday.

Lewis was joined by double Grand Slam winning Welsh international Mike Phillips and the Deputy Minister for Culture, Sport and Tourism, Ken Skates, for the landmark unveiling of the new pitch.

The DESSO pitch installation, which intertwines grass turf with millions of artificial fibres, aims to strengthen the quality of the playing surface in line with the most advanced sports stadia in the world.

The £3.1 million venture also includes new state-of-the-art 'plug and play' facilities for media and a Terraplas covering to protect the surface during non-pitch events such as rock concerts and motorsports.

The major investment has been fully supported and part-funded by the Welsh Government as part of their strategy to attract major events to Wales. 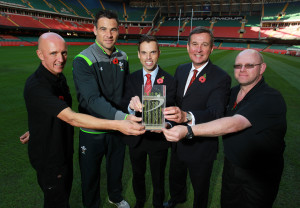 The pitch will provide the stage for Wales' four autumn internationals against Australia, Fiji (15 Nov), New Zealand (22 Nov) and South Africa (29 Nov) - 45 weeks before the eyes of the world watch Rugby World Cup 2015 host eight games at the Millennium Stadium.

Roger Lewis said: "The installation of this fantastic new pitch is undoubtedly one of the most important transformations we have instigated since the Stadium opened in 1999.

ound the world and we must ensure the action takes place on a surface which can help create the best possible exhibition of top class sport.

"The fans who attend matches will undoubtedly benefit from being able to watch games they know will flow at speed with players running across top quality turf.

"The need to remove the palletised pitch to host non-sporting events is now confined to history so we have retained true flexibility for the venue as a multi-event stadium. 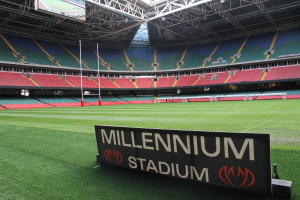 "The durability of the hybrid surface opens up exciting possibilities for a range of rugby to be played at the Millennium Stadium. This will undoubtedly enhance our legacy to the nation as both top class and community events can flourish on the surface we have installed.

"I want to thank the Welsh Government for realising the potential in this project for Wales and supporting the WRU in the project so enthusiastically."

Phillips, the 87 times capped Wales scrum half, has also hailed the new hybrid pitch at the Millennium Stadium as a game-changer for Wales.

"The Millennium Stadium is the greatest international rugby stadium in the world and with the brand new hybrid pitch there can be no doubt that Wales have the very best playing environment to rival all the other rugby nations," said the British and Irish Lions, Wales and Racing Metro player.

"The Desso brand is highly-regarded across the industry, well-known to us players and is the best pitch for the stadium. As we prepare to take on Australia, the new playing surface and retractable roof at the Millennium means we can feel absolutely certain of the conditions underfoot and plan for a faster and more fluid style of play which is guaranteed to be a fantastic spectacle for the fans."

Phillips will join the rest of the squad for a training session on the new pitch this afternoon. He added: "The squad are chomping at the bit to get out on the

new pitch and show the fans, the Welsh Rugby Union and Welsh Government how much their continued support means to us.

"The four Autumn games are huge for us in terms of World Cup preparation and we'll be holding nothing back when we face Australia, Fiji, New Zealand and South Africa over the coming weeks." 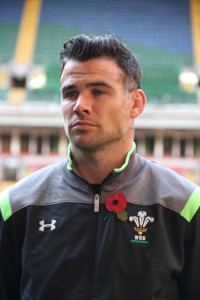 The Deputy Minister for Sport added: "It's so important that the Millennium Stadium continues to strive to develop and improve in order to compete with the best stadiums in the world. This latest enhancement will be a major boost for the stadium in attracting more events and supporters.

"We were pleased to back this important investment with £1.7million as part of our commitment to bring major events to Wales and raise our profile around the world. The flexibility provided by this new pitch means Wales can look forward to hosting more international sporting, music and cultural events. I am very much looking forward to seeing it in action this weekend!"

The 15-week installation project was carried out by Hewitt Sportsturf, who won the bid to replace the removable palletised pitch with the fixed Desso surface.

"The new pitch design includes state of the art technology and monitoring including high performance pop up irrigation to enable the entire pitch to be watered at the same time. The pitch also includes hot water undersoil heating and Desso Grassmaster stabilisation.

CEO at Desso, Alexander Collot d'Escury, also added: "Supplying the pitch for the Millennium Stadium is a prestigious project for our company and hopefully an inspiration to other multi-functional stadiums. Desso GrassMaster enables stadiums to combine sports and events in the same location, without compromising on the grass pitch. With the Desso GrassMaster pitch at the Millennium Stadium, we hope to contribute to high level, attractive rugby when Wales take on Australia, Fiji, New Zealand and South Africa."

Since its official opening in 1999, the home of Welsh rugby has staged 100 Welsh rugby internationals and continues to improve its facilities for the 770,000 paying visitors it attracts, on average, per year.

See the rest of the article on the following link www.wru.co.uk