0 A positive revolution at Thorney Lakes 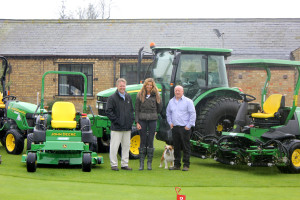 A revolution has taken place at Thorney Lakes Golf Centre in Cambridgeshire - that is how course manager Sid Matthews describes the switch to John Deere course maintenance equipment.

Thorney Lakes has three courses: 18-hole and 9-hole pay-as-you plays, both established in 1991, plus The Lakes, an 18-hole members only course built in 1996 to PGA specification.

"It's an oasis in the fens," Sid says. "It's more a links-type course at the moment, but we've planted 8000 trees; as they mature it will become a parkland course, which is the intention."

As to the reasons for the change, he explains: "We'd already worked with John Deere dealer Ben Burgess Newmarket, as we bought two tractors from them in 2010 - a 5070M with a creeper transmission, as we wanted the power to operate a verti-drainer and the roughs mower, and a 2720 compact tractor, which was an upgrade for an older John Deere of a similar size. We also ran a Gator 6x4 utility vehicle.

"Eventually we needed to replace the main course maintenance machinery, so last summer we had John Deere and another major manufacturer's mowers on demonstration.

All the equipment worked well, so we chose John Deere purely for the back-up and after-sales service we know Ben Burgess and the Deere dealer network can provide."

Ben Burgess duly delivered a package of new equipment, including an 8700 PrecisionCut fairway mower with seven-blade cylinders, three 2500B greens mowers - two equipped with greens cutting cylinders and one with tees & surrounds units, plus a spare set of tees units - a 997 ZTR zero-turn rotary mower and a new TH 6x4 Gator.

The machines soon made their presence on the courses known. "The three 2500Bs and the different cutting units give us more flexibility and the option to do whatever we want," says Sid.

"They've also speeded up the mowing and improved the quality of cut. Members have commented that they thought we'd done something to the tees and aprons, but we've only cut and boxed them off.

"We used to run two fairways mowers, which worked two days a week. As the 8700 is new and more reliable, we can send it out every day.

So, in addition to improving the fairways, we've increased productivity and saved the cost of one machine and a man, who can do other work around the course."

The purchase of this new machinery marks a significant investment by course owner Jane Hind, and further confirms the commitment and determination to make Thorney Lakes Golf Centre the place to come and enjoy the game of golf - and the new John Deere equipment is playing its part in achieving that aim.

"Positive results can already be seen in the condition of the courses," says Sid Matthews. "The appearance and presentation is as good as we'd hoped for."